we really need to start looking at banning ramadan, they are turning into flesh eating zombies and were only a few days into this “festival”. 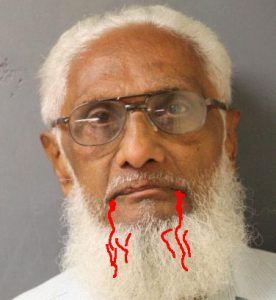 A 70-year-old Spring man has been accused of grabbing an 11-year-old boy and biting his face.

Abdus Sattar has been charged with injury to a child in an incident earlier this month in north Harris County.

The boy told investigators that he was riding his go-cart about 1 p.m. July 14 in the 5600 block of Brookway Willow when a man flagged him down, according to a criminal complaint filed in the case.

The boy turned off the engine of the go-cart to hear what the man was saying, and the man grabbed him by the shoulders and “forcefully kissed him and bit him on both of his cheeks,” the complaint states. As the boy tried to leave, investigators said, the man grabbed him by his shirt. The boy broke away and ran home. His mother called the police.