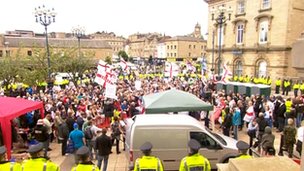 The alleged target was the EDL, who had held a rally in Dewsbury earlier that day

Three men from Birmingham have appeared in court accused of plotting to attack members of the English Defence League.

They were arrested in raids last week after police stopped a car on the M1 and found guns, knives, machetes and a home-made explosive device.

The case has been sent to the Old Bailey for a hearing on 31 July.

Mr Uddin, Mr Khan and Mr Hasseen are charged under the Terrorism Act 2006, accused of preparing for an act or acts of terrorism with the intention of committing such acts.

They are accused of manufacturing an improvised explosive device, as well as acquiring firearms and other weapons, and vehicles connected with their alleged plans.

The arrests, by the West Midlands Counter Terrorism Unit, followed a routine police stop of a vehicle on the M1 near Sheffield, South Yorkshire, on 30 June.