Translated from Digital Journal by Hermes: 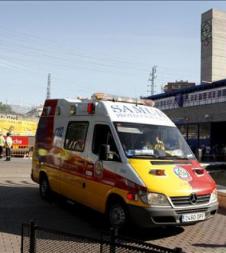 A man of arabic origin threw sulphuric acid on the face of his wife. This happened this morning at the door of the victim’s home in Rio Ulla street, no. 9, in the Pueblo Nuevo neighborhood in Ciudad Lineal district – Madrid. The victim was a 29 year old spanish woman which had naver before made legal complaints for mistreatments against her, but she had already filed for a separation from her husband.

The woman was sprinkled with sulphuric acid while screaming out of pain, but she did not lose conscience, so that she could identify her ex-partner, an arabic man, who was confronted by several passers-by who were also injured during the aggression. They rushed to aid her while shouting for help. Among them there was a pharmacist woman who noticed what was happening just at the same time the victim was attacked.

the victim remains hospitalized in the burn unit at the La Paz Hospital in serious condition. She herself could speak in perfect state of consciousness that she was divorcing  an arabic man. After having checked the wounds on her face, it was confirmed at the health center that her prognosis was grave. The attacker was also wounded by the sprinkled acid.