But will he serve it all? Or just till the ink fades 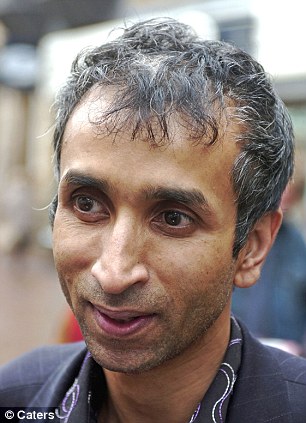 Guilty: Azad Miah, 44, hounded girls to have sex for money while running a brothel from his premises in Carlisle

An Asian takeaway owner has been jailed for 15 years after paying under-age girls for sex and inciting others to become child prostitutes.

Now detectives are also investigating possible links to the child sex ring gang in Rochdale who were jailed last week, it was revealed today.

Azad Miah, 44, targeted his victims in what the prosecution at Carlisle Crown Court described as a ‘cold, clinical exploitation of the desperate and vulnerable.’

The married father-of-four paid for the sexual services of two teenagers who were both introduced to him by the same woman.

One of those girls was encouraged to have sex with him out of desperation for cash when she was 15, while he had a sexual relationship with the other, a heroin addict, when she was aged between 15 and 17.

A jury also found the Bangladeshi national guilty yesterday of inciting three other girls, one as young as 12, into prostitution, while running a brothel above his former Spice of India shop in Carlisle city centre.

Today, Judge Peter Hughes QC said police needed to learn lessons from not heeding her complaint and that there were a number of ‘missed opportunities.’

‘A sad feature of this case is that there were a number of occasions when witnesses complained to police or community support officers about the defendant pestering them but their complaints were not taken further. As a result, opportunities were missed.

The judge added that the investigation of the case owed much to the ‘dedication and determination of one officer to trace the witnesses and make it possible for them to feel they could come forward.’

Miah groomed vulnerable white girls as young as 12 for paid sex and told one of his five child victims: ‘In my country it doesn’t matter about age’.

8 Replies to “Another MUSLIM organized serial rapist, pimp and pedophile is sentenced to time.”