These dramatic CCTV images show the moment the deranged driver screeched to a halt, did a U-turn and careered down the wrong side of a city centre street directly towards a group of revellers.

The frightened men and women scatter in terror as angry motorist Dominic Ali, 23, revs up his girlfriend’s Ford Focus and deliberately tries to bowl them over ‘like skittles’. 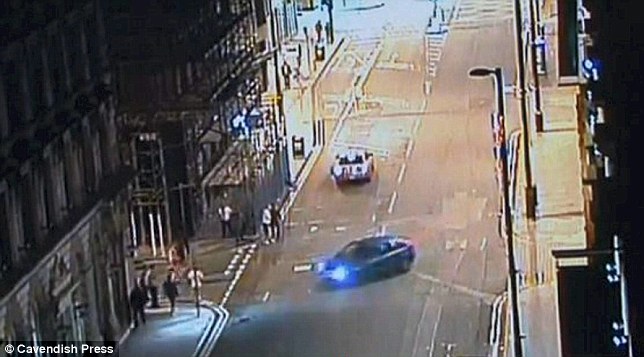 Road rage: Dominic Ali is caught on CCTV turning his girlfriend’s Ford Focus towards a group of pedestrians on the streets of Manchester city centre 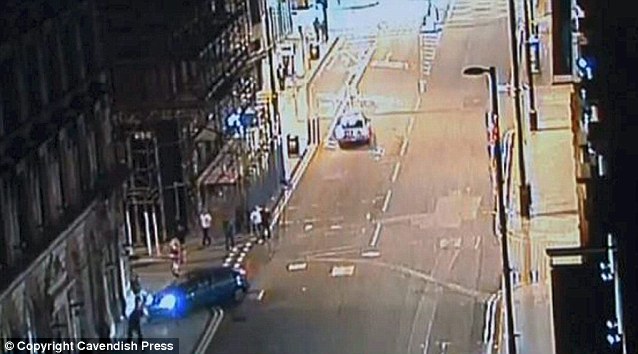 Crazed: This freeze frame captures the moment when Ali crashed into a lamppost on the street corner as he drove at high speed towards the pedestrians

The businessman said he committed the act of extreme road rage because the group of people had been mocking him as he drew up at a junction.

The images show an oncoming taxi pass by as Ali made the potentially deadly manoeuvre. The pedestrians are only saved by a lamppost as they dart for cover.

Ali then slammed his car into reverse and sped off backwards into the night as his victims furiously punched the bodywork of the blue vehicle.

Amazingly no one was hurt in the 4am incident which occurred on October 14 last year after the group left a bar in Manchester city centre.

Ali drove the battered car home but later handed himself in after he saw footage of the attack on BBC TV’s Six O’Clock News. 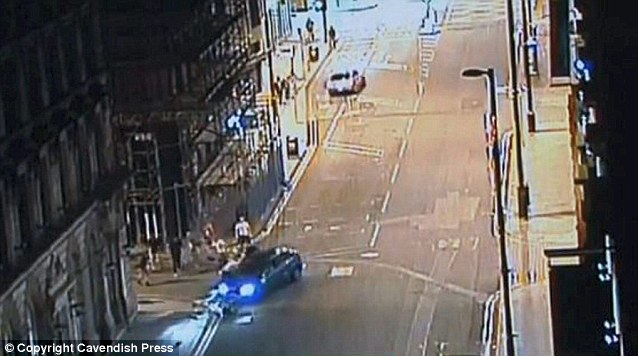 Dangerous: After narrowly avoiding hitting the pedestrians on the street corner Ali slammed the vehicle into reverse and drove off. The angry victims slam their fists against the bodywork of the car 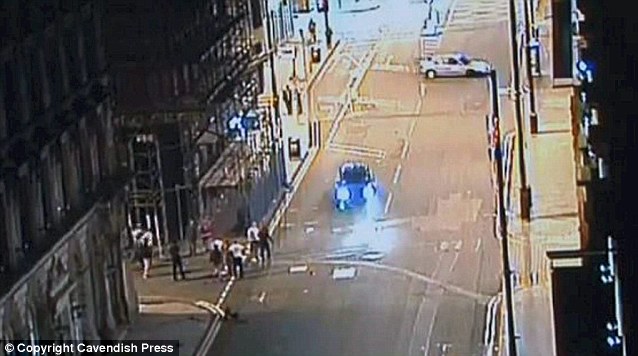 Madness: Amazingly no one was hurt in incident and businessman Ali drove the battered car home. He later handed himself in after he saw footage of the attack on BBC TV¿s Six O¿Clock News

He later claimed a passer-by had tried to punch him through the driver’s side window whilst he was picking up a friend from a ‘gentleman’s club’ and he took revenge on the ‘spur of the moment.’

At Manchester Crown Court Ali, who runs a sports company, was jailed for eight months after he admitted dangerous driving.

His mother sobbed in the public gallery as her son was also disqualified from driving for two years and ordered to pay £366 compensation to Manchester City Council for the damaged lamppost.

Earlier Tim Greenald prosecuting, said the incident occurred after Ali borrowed his girlfriend’s car and drove it into the city centre where he got caught up in the fracas. 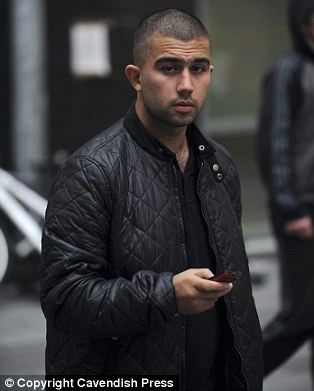 Jailed: Ali, who runs a sports company, was jailed for eight months after he admitted dangerous driving

He said: ‘There was between three and four passengers in the car as well as the defendant driving.’

According to Mr Greenald the front end of the car was damaged, the lights were damaged, and there was damage to the front suspension and nearside tyres.

‘He stated that he was picking up a female friend from a gentleman’s club and had driven up and saw fighting,’ added Mr Greenald.

‘A male tried to hit him and kicked the car and he claimed to have driven off because he was pursued by males.

‘He said he had to go back to pick up his friend and he was trying to turn right when he lost control due to the nature of the power steering.

‘We say it was intentional and he had driven off.

‘There are clearly words being said but if he had been punched and his car was kicked it’s nothing that the court can see.

‘When he made that right turn there were pedestrians on the road so that endangered their health and safety.’