But think of all the… 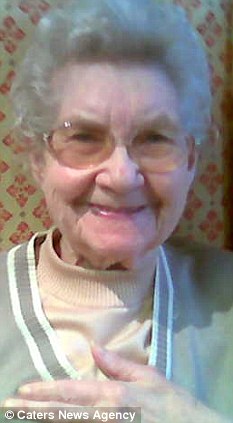 Tragic: 87-year-old Dorothy Griffiths was left unattended for ten minutes because her Muslim nurse was praying, an inquest heard

A vulnerable pensioner who died after a violent fall lay on the floor bleeding for up to ten minutes because a Muslim nurse was away praying, an inquest has heard.

And once Mr Bhutto came to check the patient he said she was fine, only for her to take a turn for the worse four hours later, the inquest was told.

On October 24 last year Mrs Griffiths had fallen from her bed, cutting her head and suffering a gash to her hip.

She had been a resident at the home since developing advanced Alzheimer’s disease in 2009, and eventually died at Barnsley Hospital in November.

Carer Zoe Shaw told Sheffield Coroners Court she heard a ‘bang’ in the early hours of the morning and discovered the 89-year-old on the floor.

Worried for her welfare she ran to the office to request Mr Bhutto take a look at the elderly woman.

Weeping as she gave evidence she said she tried to call him and another member of staff told her she ‘had to wait two minutes for him to finish’ as he prayed.