Every weekday morning I drive to a building surrounded by razor wire. It has  bomb-proof windows, security guards posted next to its tall, iron gates, and sturdy fences that ring the perimeters. Access to anyone is by entry phone — or by convincing the guards you have a right to enter.

So do I work in a prison? No. I have children who attend a Jewish school near our home in Manchester.

Though the security at the school may sound shockingly heavy-handed, my sons barely notice it and we parents gratefully accept it. However, every so often I ask myself: is this how we really need to  protect a school in modern Britain? 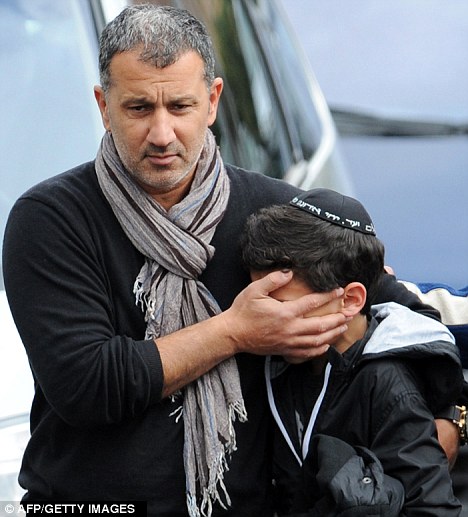 Horror: A child is comforted by a man after this week’s shootings in France

Sadly, there is no choice. And after the horrific events in Toulouse this week, which saw the killing of three children and a rabbi at a Jewish school just like my children’s, I can’t see that changing.

I was driving when the news came through on the radio and, shaking hard, I just about managed to manoeuvre the car through the morning traffic as I fought to take it in. As soon as I could, I pulled over to phone my husband and tell him what had happened.

Not only was there deep shock and profound sorrow, there was something else, too — a cold dread that fingered the spine. Put simply, I was terrified.

For the sorry truth is that schools like my children’s would not need such protection if there was a not a genuine threat in  Britain, too. Don’t believe me? Three of my four children attend Jewish schools (the fourth is now on a gap year), and over recent years they, along with many of their friends and classmates, have been targets for anti-Semitic abuse.

Only recently, my 13-year-old son and his friends were walking home from the local Jewish high school when a group of  yobs from across the road taunted them by shouting: ‘You Jews, Zeig Heil! We  hate you, Jews.’

Ask any of the pupils about this kind of incident and they will tell you — to quote my 16-year-old son — that ‘it happens all the time’.

These are not teenagers who are ultra-orthodox, so there are no overt signs of their religion, except that they are  walking home from a Jewish school. They look like any other scruffy kids as they amble along with their skewed ties, untucked shirts, backpacks and pockets jammed with jaw-rotting sweets. But even that relative anonymity doesn’t protect them. 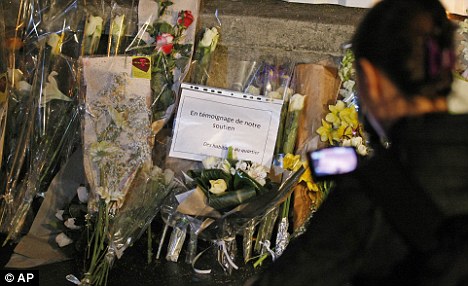 The son of one friend of mine had eggs thrown at him by a group of youths as he made his way home, while another was actually set upon by a trio of mindless young idiots — though he managed to break free and run away, thankfully, with just a few bruises. Little wonder that on the afternoon of the Toulouse murders, as I went to collect my seven-year-old daughter from school, the atmosphere in the playground was febrile with what I can only describe as a collective terror.

8 Replies to “British yobs, racial slurs and why I fear for my children: As a Jewish school is attacked in France, one British mother’s utterly shocking account of the anit-Semitism her children suffer”