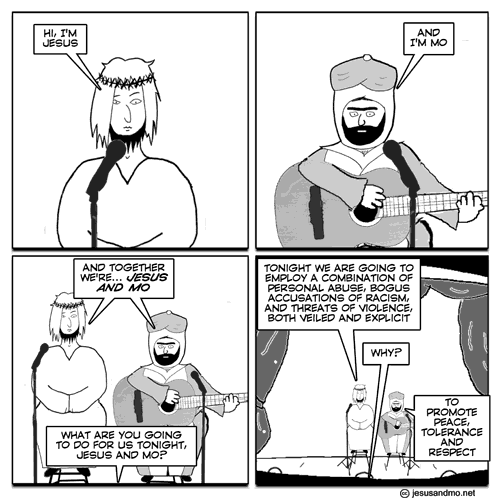 The One Law for All (OLFA) campaign will be holding a rally for free expression in London on 11 February between 14:00 and 16:00. OLFA campaigns against the encroachment of religious laws, in particular the rapidly growing reach of Sharia within the UK, and for the observance of the principle of one secular law for all. This principle provides the necessary preconditions for freedom of thought and expression, but alas of course does not necessarily guarantee them (e.g. witness the many pieces of legislation regarding thoughtcrimes against ‘diversity’, etc).
The reason for calling this protest at this point in time is explained by its organisers Maryam Namazie and Anne Marie Walters as follows:

The call follows an increased number of attacks on free expression in the UK, including a 17 year old being forced to remove a Jesus and Mo cartoon or face expulsion from his Sixth Form College and demands by the UCL Union that the Atheist society remove a Jesus and Mo cartoon from its Facebook page. It also follows threats of violence, police being called, and the cancellation of a meeting at Queen Mary College where One Law for All spokesperson Anne Marie Waters was to deliver a speech on Sharia. Saying ‘Who gave these kuffar the right to speak?’, an Islamist website called for the disruption of the meeting. Two days later at the same college, though, the Islamic Society held a meeting on traditional Islam with a speaker who has called for the death of apostates, those who mock Islam, and secularist Muslims.

5 Replies to “Rally for Free Expression: One Law for All”