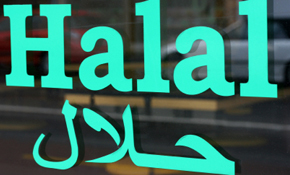 A helping of Halal

by Natalie Hart in Life

Many Brits would prefer their meat to be clearly marked as Halal if they were being served it in a restaurant, according to a recent poll. The issue drew headlines this week after it emerged that sporting venues across London regularly serve Halal products to customers without informing them, either for religious or cost reasons.

Respondents to a separate poll are divided over how humane they consider Halal meat. ‘Consumers should be informed of what they are paying for and be provided with a choice,’ said one respondent, while the morality of Halal meat prompted another panellist to say ‘Halal is more compassionate than stunning ‘. Another, however, called it ‘a cruel practice’.

Halal meat is defined as coming from an animal that has been slaughtered by a swift cut to the animal’s neck allowing its blood to drain out, as opposed to initially stunning the animal using an electric bolt prior to slaughter: the conventional British method. Halal meat is primarily eaten by Muslims, as Islam proscribes the consumption of blood or pork and stipulates this method of slaughter. Some Muslims also believe that a prayer to Allah must be offered prior to slaughter.

Religious sentiments were also stirred up by the story’s news coverage. One respondent argued against Halal meat by saying ‘This is a Christian country and Christian laws should apply,’ while another described it as ‘Islamification by the back door.’ Another respondent, however, took a more critical view of the media coverage and said ‘This is a scare story, designed to promote the new labelling initiative in a particularly nasty, xenophobic way.’

For details and poll results please click to continue:

4 Replies to “A helping of Halal”