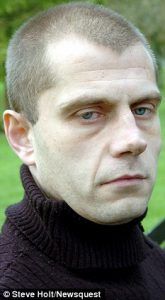 Victim: Andrew Goodram pictured at the spot in Queens Park where he was attacked

A father-of-two was subjected to a racist and brutal attack by a gang of Asian men who targeted him – simply for being white.

Andrew Goodram, 31, suffered a punctured lung and two broken ribs after the gang of four thugs shouted: ‘white b*****d’ at him before subjecting him to a vicious assault.

During the assault Mr Goodram, a labourer, was repeatedly kicked in the head, face and body at Queens Park in Bolton, Greater Manchester.

One of his attackers then stood over him and stamped on his chest causing what police described as ‘significant injuries’.

The beating only came to an end when one of the men decided the group should leave and they all ran off in different directions.

Mr Goodram, a father of two managed to stagger home after the assault but had to spend six days in hospital.

Greater Manchester Police yesterday confirmed that the attack, which took place at 7pm on October 19 was being treated as a racially motivated incident.

One Reply to “Father-of-two beaten up and left for dead by Asian gang for being white.”