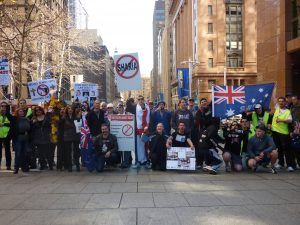 For a variety of reasons, I was unable to attend the ADL rally in Sydney’s Martin Place yesterday. One of those reasons was the incarceration of Martin Brennan, the leader who organised this protest against sharia in Australia.

The demo had a smaller turnout than expected for reasons suspected and unsuspected (I suspect Martin being in detention may have had a bit of a chilling effect, but that’s just me), fear probably playing a respectable role there, when most of the people who are fed up with sharia are just normal aussies who are not quite the rent-a-mob that the lefties/antifa and the rest can call up at a moment’s notice.

We tend to work, hang out with friends and families, that sort of thing, rather than heading out to protest at the drop of a hat.

Regardless of the number of aussie patriots out there yesterday, there were at least twice as many as stood with us in Melbourne a few months back, and to me that’s a win.

Now, a word from one of the attendees:

Although it very nearly did not occur, as the authorities suddenly decided to detain Martin Brennan(ADL organiser) just two weeks out from the rally on an alleged breach of his visa. Martin had taken out the appropriate ‘Schedule One’ permit approved by the The Rocks LAC, however if Martin could not be there, the permit would be invalid. So after to speaking with Martin, Darrin Hodges took out another permit in order to allow the rally to go ahead because that was Martin’s primary concern even given his circumstances. To quote Martin “they’re not gonna stop this f*%$*g rally!”

It was a lovely sunny day, bit chilly in the city but still good rally weather – typical Sydney winters’ day. People who had volunteered to be marshals started arriving around 10.30 so it could be explained to them what was expected of them. The police were on hand including four mounted police, we were hoping it would be an easy day for them and a peaceful and successful day for us – which
is exactly how it turned out. 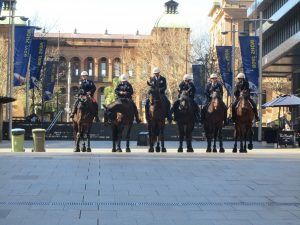 On the day a small gaggle of socialists were holding a ‘ban live export’ rally in front of parliament house, although curiously, they were holding banners about
‘anti-racism’. Some of them came down and were taking pictures of the growing ADL crowd; I guess they have grown tired of throwing darts at my picture! 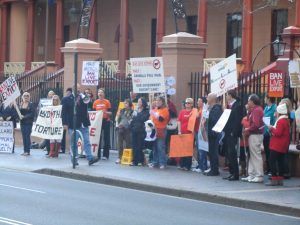 At around midday the ADL South West Division (henceforth, ADL-SWD) came with about 30 strong up Martin Place chanting ‘aussie aussie aussie oi oi oi*`, they brought that youthful energy to the rally that really sparked people up – they made quite the entrance! 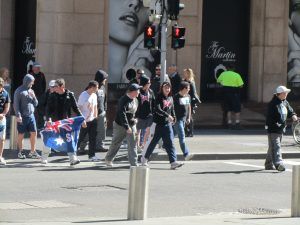 The lads from the ADL - South West Division arriving. 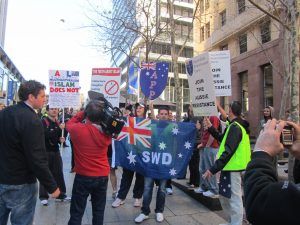 Richard Lalich, one of the ADL people kicked off proceeding just after midday with a rousing introduction where he spoke about the evils of Shari’a, he was followed by Nick Folkes, Sergio Redegalli (of ‘Ban the Burqa’ mural fame), Darrin Hodges, Carol Buckley and a few others gave good speeches from different perpectives. There was also a small Coptic presence as well as some from the Q-society. 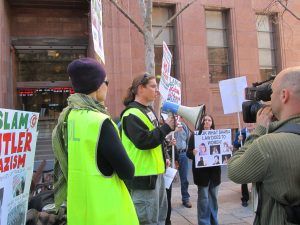 Richard talking to the assembly. 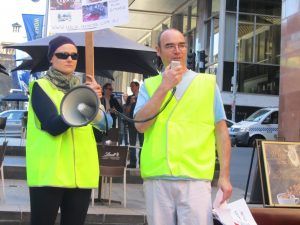 Darrin, up there with Carol.

A small socialist group did make an appearance during the rally, but the police kept them at bay about 100 metres up the street, well away from the ADL group. They also tried later to disrupt us just as we were finishing up, but once again the NSW police prevented them from doing so and they were pushed back another block by the police line. ADL are highly appreciative of the police presence and many rally goes thanked the police for their efforts.

Richard and Darrin also did interviews with the TodayTonight (current affairs program) crew as well as various other media outlets. All in all, it was a fantastic day! A peaceful protest against the imposition of Shari’a and the spread of Islamic doctrines. Many thanks to all those who attended and helped make it a peaceful and successful day.

I missed a good day, and a successful stand. Enjoy some more photos (courtesy of KM and DH): 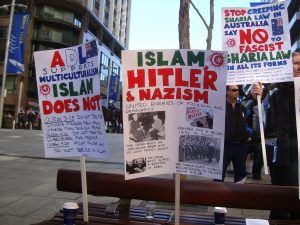 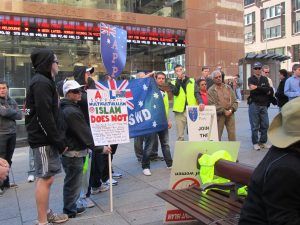 more signs of the times. 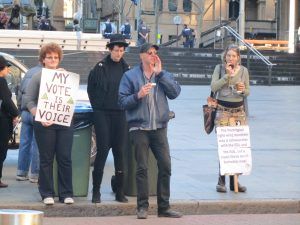 Note these signs from the meagre opposition. 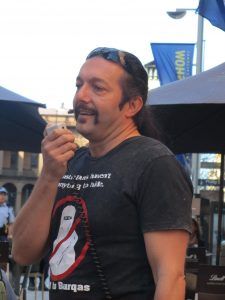 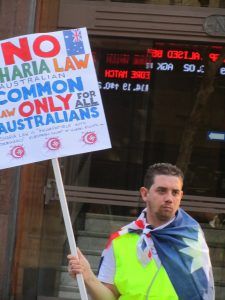 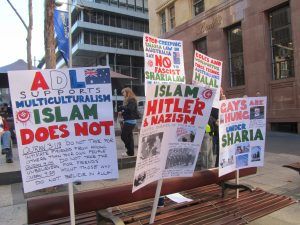 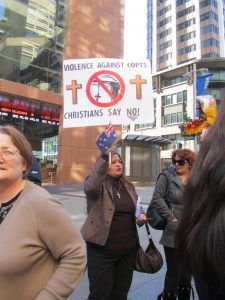 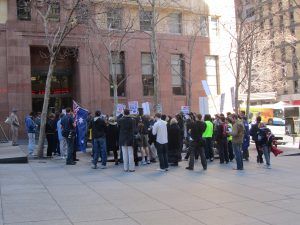