Earlier this month a young man was attacked, beaten, kicked, and robbed by “youths” in a Berlin subway station. He was left in a coma as a result of the attack. A second man might have suffered a similar fate had it not been for the timely intervention of member of the Bandidos motorcycle club — the only bystander who was willing to help the victims. (Readers who are interested in more information may consult these two stories from The Local.)

Politically Incorrect has posted a comprehensive report on the event, including an overview of the socialist political context that enables these excesses of cultural enrichment. Many thanks to JLH for the translation.

Berlin in a Coma — An “Isolated Incident” as Something to Learn From
by Little Bear, PI Berlin

The case of journeyman painter Sebastian H. — kicked into a coma shortly before midnight on February 11, 2011 by four youths in the Berlin Lichtenberg subway station — has given the city no rest since it became known four days ago. Since similar “individual incidents” are clogging up local newscasts almost daily as dry two-line reports, what makes this one different? But first the facts. 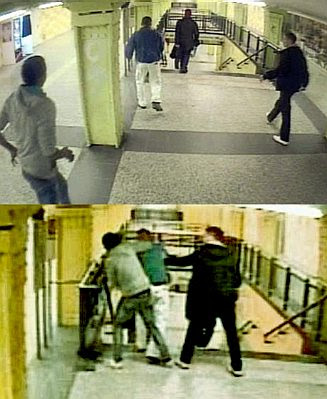 The hunting down of Sebastian H. and the subsequent excess of violence were recorded by a subway platform camera. The recording shows the thirty-year-old in flight from the four youths until they catch him at the stairs, shove him down and immediately begin kicking the prostrate man. As he rises, dazed, and holds on to a column, one of the perpetrators springs at him full force. Then he robs the motionless figure. In further recordings passers-by on the platform are seen, who apparently neither help nor call the police. The police receive a total of one emergency call.

The second victim, after at first successfully fleeing, is found again by the perpetrators in front of the station and also kicked into submission. When a passer-by, according to police reports, intervened and said a “few choice words,” the youths abandoned their victim and ran away. According to other passers-by, it was a member of the “Bandidos” motorcycle gang.

Recognition thanks to “violence prevention”

In the subway videos a police officer recognized a dark-skinned student from a class he had given years ago in the prevention of violence. So all four perpetrators could be caught quickly. They were exclusively from immigrant families (from Kenya, Albania, Kosovo and Iraq). At their initial interrogation, they claimed that the painter and his colleague had provoked them with “Sieg Heil” shouts. The police evaluated this as an agreed-upon tactic, and it was soon withdrawn by the accused. According to the police, the intention of the attack from the beginning was to injure someone badly and then rob them

The sister of Sebastian H. — after he had been put into an artificial coma — wrote to the perpetrators on her Facebook page: “I hate you endlessly… I am a nurse and have seen many awful things, but the sight of my own brother was the worst and most horrifying thing I have ever experienced or seen.”

The first and most important reason for the continuing media interest and the palpable public empathy could be that the attack was coincidentally documented by video camera and then spread to the internet. A second reason is that it affected two craftsmen on the way home from a quitting-time beer. Parts of the populace which usually are reached by nothing else and only concentrate on their daily struggle to survive, also pricked up their ears. The Springer tabloids gave it corresponding coverage.

And all at once, justice implies that it could make use of the framework of the existing laws, if it was just willing. Suddenly, all four of the perpetrators, even the 14 year-old are held in investigative custody, which was usually eschewed because a steady domicile was present and there was “no danger of flight.” And the charge — we hear and are astounded — is “attempted murder in the course of robbery — two incidents” (instead of “grievous bodily harm”).

That is one of many conclusions that can be drawn from this case and make it symptomatic for the condition of our society: 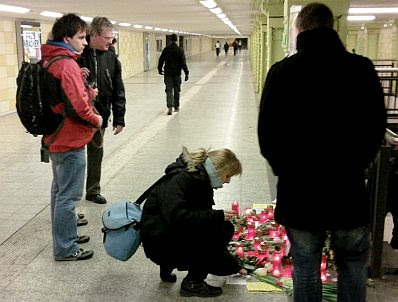 Members of the PI group Berlin met Saturday noon for a vigil in Lichtenberg station. Numerous candles burned at the spot where the pursuit of Sebastian H. had begun. Again and again people of various skin colors and languages came by to lay flowers or read the spontaneous notes taped to the columns. “Here, the life of a human being was destroyed for no reason and willfully.” “Politicians, wake up and change the youth criminal laws!” “No tolerance for violent criminals, no immigration bonus!” On a laid-out flyer: “Berlin in a Coma — Red-red senate: gone to ground. Justice: failed. Police: kaput from budgetary savings. Berlin transport authority: lays off personnel. Citizens: duck for cover.” There is really no better way to summarize the dominant misery in Berlin. We can hope that the citizens — momentarily jolted — retain their displeasure until the Berlin elections in September and vote out this incompetent senate.

It was important for the Berlin PI group to show solidarity with the victim of this cowardly act at this place, but also to indicate in conversations with passers-by and subway riders that there are specific problems of violence among immigrants, which have little to do with the German majority and much to do with the socialization of the perpetrator in their societies of origin. With most people who spent a few minutes at the vigil, we found open minds. The populace knows full well what “groups of youths” are violent and is also smart enough not to fall in with the xenophobic pied pipers of the NPD.

Oh, on top of that: 13-year-old Kevin, who a short time later on the sidewalk in Reinickendorf encountered a “youth gang known in the neighborhood,” was kicked into a heap because he “looked at them wrong.” “He was just in the wrong place at the wrong time,” his father said with resignation at his son’s sickbed. And in the case of a 39 year-old man who was struck down at the S station in Lichterfelde by two young men from immigrant families, other passengers intervened and prevented anything worse. In both cases, there were no videos.

For a complete listing of previous enrichment news, see The Cultural Enrichment Archives. Posted by Baron Bodissey at 2/22/2011 06:56:00 PM

3 Replies to “Berlin in a Coma”