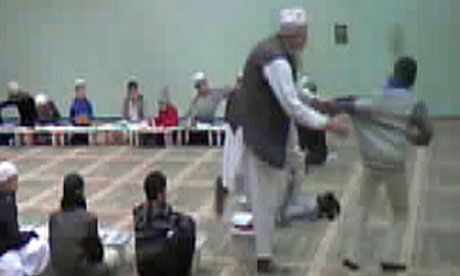 Dispatches, Lessons in Hate and Violence, secretly filmed a man apparently hitting and kicking children during Qu’ran lessons at a school in the Markazi Jamia mosque at Keighley, West Yorkshire.

An Islamic school in Birmingham in the same documentary, where a preacher was filmed making offensive remarks about non-Muslims, said it would close early for half-term, amid fears pupils could be the target of far-right groups.

West Yorkshire police issued a statement regarding the arrest: “We have recently become aware of a number of incidents of alleged assault at a mosque and just before the weekend were able to view edited footage of the alleged incident. One man has been arrested and released on police bail pending further inquiries. West Yorkshire police are receiving full co-operation from the Keighley Muslim Association who are working with us in support of the inquiry.”

The Birmingham footage was obtained by an undercover reporter posing as a volunteer, using a hidden camera. It showed a preacher at Darul Uloom, a fee-paying school in Small Heath, making offensive remarks about Hindus, ranting about non-Muslims and telling pupils they face torture in the afterlife if they adopt western customs such as dancing or listening to music. He tells them to avoid more liberal Muslims. “The person who’s got less than a fistful of beard, then you should stay away from him the same way you should stay away from a serpent or a snake.”

Another group are told in an assembly: “The disbelievers, they are the worst of all people. The Hindus do, they drink piss, I’ve told you this. Do they have any intellect? No.”

After meeting West Midlands police, headteacher Mujahid Aziz said half-term would begin a week early. Pupils will not return to classes until March.

“What people will see in that clip is completely contrary to what we teach at the school about harmony and awareness of different faiths,” said Aziz. “Our concern now is for the safety of children and people coming to the mosque, because we are worried that some people will get completely the wrong impression once they have watched this programme.”

John Hemming, the Liberal Democrat MP for Birmingham Yardley, criticised the documentary: “If Channel 4 thinks this is a school where racism and intolerance is accepted in any way, they have got their facts seriously wrong. [The school] have already had hate mail, and now they are having to close for the safety of their pupils. This kind of documentary is ideal fodder for the [far-right] English Defence League. Channel 4 is putting the safety of children at risk by criticising a school which is doing its job properly.”

A Channel 4 spokesman said: “This investigation, which is clearly in the public interest, shows secret footage of numerous adults on different occasions teaching pupils as young as 11 years of age contempt for other religions and wider society. We stand by our investigation and think the programme speaks for itself.”

Channel 4 said it was aware of the Yorkshire arrest, but had no plans to change its documentary; the broadcast would “fairly reflect the latest developments in our investigation”.

A previous Dispatches documentary in Birmingham investigated the alleged preaching of hate and extremism in mosques and Islamic centres.

West Midlands police investigated o see whether criminal offences had been committed but found there was insufficient evidence to bring charges, and subsequently complained to OfCom, which rejected the complaint.

The documentary makers then began a libel action against West Midlands police and the Crown Prosecution Service for accusing them of distortion; they apologised to Hardcash Productions and agreed to pay £100,000.

The Department for Education said: “We cannot comment on individual cases, but any allegation of harsh physical punishment or the teaching of extremism in madrasas is very concerning. Abuse and harm to children is unacceptable and any allegations should be reported to the police.” Inspectors had the “experience, knowledge of the faith curriculum and language skills” to inspect such schools with the rigour and objectivity required.