Now here is a great example of why it’s such a good idea to import millions of people with dramatically foreign political and cultural ideas into your country. This for the ‘cultural enrichment’ files. H/t Don 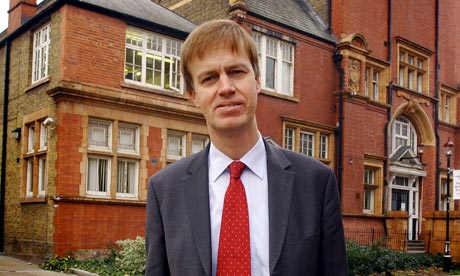 Stephen Timms, Labour MP for East Ham, was stabbed at his constituency surgery in May this year. Photograph: Linda Nylind for the GuardianA former Labour minister was stabbed twice in his stomach by a woman who wanted to kill him as “revenge” for his voting for the Iraq war, a court today heard.

Roshonara Choudhry, 21, “smiled” just before she plunged the knife into Stephen Timms MP, in an attempted killing for political reasons. The Old Bailey jury was told she is not mentally ill and was calm after the attack.

Choudhry had gone to Timms’s east London constituency surgery on 14 May 2010, intent on stabbing him to death, the court heard. Weeks before, she had bought two new knives, one to stab him with, the other as back-up in case the first knife broke during the attack. Timms was stabbed twice in the abdomen, and his attacker, who was one of his constituents, had to be pulled off him. The MP for East Ham has made a full recovery.

The court heard that Choudhry had confessed all to police, telling detectives: “I was not going to stop until somebody made me.” Interviewed hours after the attack, Choudhry told police: “I was trying to kill him.” When the interviewing officer, detective inspector Simon Dobinson, asked why, she replied: “Because he wanted to invade Iraq.” Asked what that would achieve, she said: “Punishment.” She later added: “I was hoping to get revenge for the people of Iraq.”

She said she chose to stab Timms in the stomach because she lacked strength and that part of the body was soft, to get the knife in.

Choudhry, who was not in court, is accused of attempted murder and two charges of having an offensive weapon.

Jeremy Dein QC, defending, said she did not recognise the jurisdiction of the court and did not wish her lawyers to challenge evidence put before the jury. She would not be attending her trial.

Timms told the Old Bailey he thought Choudhry was coming to shake hands and he even stood up as she approached the desk where he sat. As she offered out one hand, she used the other to stab him, the court heard.

He said Choudhry had made an appointment for his Friday afternoon constituency surgery, and asked to see him rather than an assistant. The MP told the jury: “She didn’t go and sit down as she continued to come towards me where I was standing to greet her. I thought she must have been coming to shake my hand. She made as if she was coming to do that. She looked friendly. She was smiling, if I remember rightly.

“I was a little puzzled because a Muslim woman dressed in that way wouldn’t normally be willing to shake a man’s hand, still less to take the initiative to do so, but that is what she was doing. She lunged at me with her right hand.”

Timms pointed at his stomach to show the jury where the knife had gone in. He said: “I think I knew that I had been stabbed, although I didn’t feel anything and I can’t recall actually seeing a knife, but I think I said ‘She has a knife’ or words to that effect. I attempted to push away the second lunge but was not successful.”

Opening the prosecution, William Boyce QC said Choudhry had made “very full admissions” to police about what she had done. He said Choudhry would not give evidence, and her barrister would not be inviting the jury to acquit her. Boyce added: “Nor is there any question she is suffering from mental illness: she is not.”

Mr Justice Cooke said the evidence would be concluded today and he would sum up tomorrow before sending the jury out to consider their verdicts.