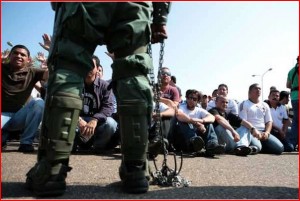 Fierce and growing protests over media freedom have left at least two students dead in Venezuela, and graphic images depicting violent tactics employed by the police there have started to flood the Internet.

Police armed with tear gas and rubber bullets have left students bloodied and battered in Caracas and other cities during a week of protests over President Hugo Chavez’s tightening gag on the opposition press.

On Sunday, Chavez ordered five cable stations shut down for refusing to broadcast his frequent speeches, setting off nationwide demonstrations in a country already wracked by water shortages, electricity rationing, alarming crime rates and the plummeting value of its currency, the Bolivar.

Student protesters have organized their efforts by planning their demonstrations on Twitter, which is serving as both a public message-board for activists and a storing house for images of the worst of the violence.

Chavez has fought back by declaring that “using Twitter, the Internet (and) text messaging” to criticize or oppose his increasingly authoritarian regime “is terrorism,” a comment that recalls the looming threats of his allies in Iran, whose bloody crackdown on physical and electronic dissent may be blazing a trail for the Latin strongman.

Venezuelan journalist Nelson Bocaranda told El Nuevo Herald that the government has launched an army of Twitter users to bring down online networks and try to infiltrate student groups.

“They are scared by Twitter,” he told the paper, noting that Chavez fears that the social networking system will allow students to follow the model of Iran and spread their protests by coordinating them online.

As the opposition seethes, Chavez has threatened a “radical” response to student activity, promising to “deepen the revolution” and “impose authority” wherever flashpoints occur.

“There are some attempting to set fire to the country,” Chavez said in a televised address on Thursday. “What are they seeking? Death.”

Chavez’s attempt to silence RCTV set off similar protests in 2007, when it was barred from network broadcasts and put on cable. But that has not deterred viewers, said Michael Shifter, a Latin America analyst at the Washington-based Inter-American Dialogue.

“If he kicks (RCTV) off the regular station and puts them on cable (Venezuelans) are going to watch cable…. If he kicks them off cable they’ll find another medium,” he said, adding that Chavez has underestimated the thirst for information in his country.

Internet analysts say Twitter, which blossomed before the protests but has exploded since they began, could change the face of politics in Venezuela, where hotly contested elections are approaching in September.

Using Twitter as an example, tech consultant Doug Hanchard wrote on Jan. 12: “The Internet might be what changes … the political landscape in Venezuela.

“Make no mistake,” wrote Hanchard, an adviser who covers the intersection of information technology and government, ” Latin American cyberspace will be a busy place this year.