…much to the anger of actual rights groups. Once again, the left shows its corrupt authoritarian leanings while its veneer of sanctimony splits at all seams.

H/T to Islam in Europe: 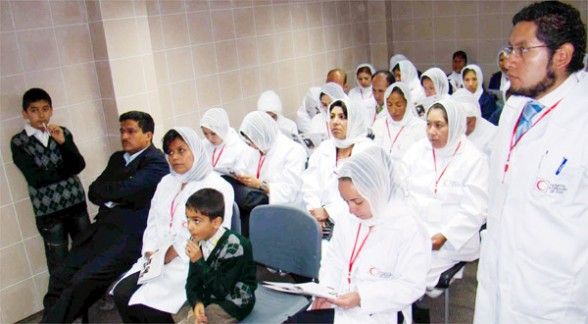 On Wednesday, November 24, Iranian demands that female nurses don the hijab in response to Iran’s providing $1.2 million for funding of the new El Alto city hospital in Bolivia sparked a national outcry among women’s rights advocates within Bolivia.  In an international teleconference in La Paz held between Bolivian President, Evo Morales, and Iranian President, Mahmoud Ahmadinejad, to celebrate the hospital’s opening, nurses were shown wearing hijabs as part of their new uniform regulations.

This imposition of political Islamic pseudo-religious attire from another country is causing a rift within Bolivian political ranks.  Even though the Morales administration is the profoundly socialist MAS party, the Iranian demand is still seen as an affront on Bolivian cultural integrity especially in a country with a Roman Catholic majority.

Lourdes Millares, the Deputy for the Democratic and Social Power Party called the Iranian hijab demand, “…an assault on the dignity of women…” and excoriated Morales for, “…submission to the rules of another government.”

Although Millares finds it hard to believe that the hospital would willingly impose the hijab, the government run newspaper, Cambio, states that the hijab reflects, “…health,  cleanliness and respect for the culture of Iran.”  However, Health Minister, Ramiro Tapia, also called the new hijab regulation an, “…assault on women.” His office is under heavy demand by outraged Bolivians for an explanation of the veil, which is not an Islamic religious requirement, but a visible manifestation of aggressive Islamic political conquest much like secular clothing and colors represent gang territorial boundaries.

Started as a visual method of approval for their fundamentalist male counterparts in the early ‘70s among female university students in Egypt, the hijab had been banned in Turkey and Egypt until recently.  It is still banned in Tunisia and was recently banned in public venues in France.  It is not an Islamic religious requirement nor is it mentioned in the Koran or hadiths.  The hijab’s sole purpose is as a political and cultural tool thereby designating it as veiling resistance.

Unfortunately, the experience of the Bolivian nurses is not unique.  Even though the hijab is not universal attire within the Muslim world, it is being used to wage relentless warfare on women by forcing its wearing and thereby submission to fundamentalist Islam on moderate Muslim and non-Muslim women alike.  In the UK recently a Tory Muslim Peer, Baroness Warsi, was egged by fundamentalist Muslim men for not wearing the veil as she walked in Western dress within her constituency.  Christian women in France, who must travel through heavily populated Muslim sections of their towns and cities, routinely don the hijab for safety’s sake.