First here is a report from a left leaning Scandinavian paper on rape in Norway. Typically, this paper did not report facts and likely mocked and scorned those who did. However facts have a way of changing minds. Or perhaps the editor has a daughter or wife. In any case go over to Gates and read it. I will paste a sample below.
The Observer sends the following translation of an article about the latest rape statistics in Norway, which — surprise — turn out to be significantly culturally enriched.

First, a note from the translator:

This article is from town of Stavanger on the western coast of Norway. It concerns the big increase in rapes and attempted rapes in the city, and the fact that non-Westerners are behind almost all of these rapes.

The editors of the local rag, Stavanger-Aftenbladet — which by the way is an outlet for politically correct journalism — have realized at last that it’s no use trying to hide the facts in these cases anymore, and they have finally published a very politically incorrect article about the matter.

And why not? Anybody in the city with half a brain knows that the perpetrators are non-Western males.

It’s funny — when I was young, women could walk around freely in Stavanger at any hour of the day without having to fear for their own safety. Back then there were hardly any non-Westerners in the city. I was probably 13 or 14 before I ever saw a black person. Now there is a big immigrant community in the city, and crime rates have gone through the roof.

Here is an article by the Baron on women, Islam, and Leftism. This is truly an excellent piece. Print this one off and leave it on buses and restaurants and anywhere people may find it. This is in the top 20 things I have read on the subject of Islam and womens rights.

No Hijab? That’s Violence Against Women!

One of the debating techniques commonly employed by the Left is to take a worthwhile principle and exaggerate it or invert it to create absurd distortions of moral arguments and force its opponents into a swamp of rhetorical excess, false analogies, and categorical errors.

Three examples should suffice as illustrations:

So much for the Left. What about Islam?

For the last eighty years or so radical Muslims have studied, absorbed, and adapted the ideas and techniques of the Socialist Left. As I have pointed out previously, the turgid prose of radical Islamic theorists is all but indistinguishable from that of orthodox Marxists, once certain key words and phrases have been substituted.

So it’s no surprise that Islamists have borrowed the rhetorical techniques of the Left. They are particularly adept at taking a well-known Western political principle, twisting it out of all recognition, and then reversing it to use against the infidel.

The last of these items is demonstrated by the gradual evolution of a woman’s “right” to wear the hijab. The boiling of this particular frog begins with innocuous assertions of freedom of choice.

Then, after the infidel’s resistance has been worn down over a period of time, accusations of violent intentions on the part of non-Muslims are thrown into the mix. The Investigative Project reports on a confrontation between Congressman Keith Ellison and Zuhdi Jasser:
– – – – – – – – –

Responding to Jasser’s call for reform, [Rep. Keith] Ellison launched into a tirade. “I think you give people license for bigotry,” Ellison told [Zuhdi] Jasser. “I think people who want to engage in nothing less than Muslim-hating really love you a lot because you give them freedom to do that. You say, ‘yeah, go get after them.’“

Muslims must “stand against” extremist members of their faith, Ellison said. But he seemed more threatened by Jasser. “Now is somebody going to snatch my 13-year-old daughter’s hijab off, call her a horrible name, spit on her because of something that you said, Dr. Jasser, I worry about that,” he added.

Opposition to the veil is thus conflated with intended violence. And it’s true that real anti-hijab altercations have occurred. Back in 2004 CAIR complained to the authorities about an incident in Florida:

The Florida office of the Council on American-Islamic Relations (CAIR-FL) today called on law enforcement authorities to investigate an assault on a Muslim woman at a shopping mall in that state as a hate crime.

The victim, the owner of a jewelry kiosk at Westshore Mall in Tampa who wears an Islamic head scarf, says she was verbally and physically assaulted on Tuesday by three people who told her to “get out of (America)” and said her religion is “hateful and violent.” The assailants allegedly blamed the woman for the recent Madrid train bombings.

During the assault, one of the attackers allegedly grabbed the victim’s throat and attempted to remove her head scarf. The perpetrators fled when the victim ran to find mall security officers. Police are currently investigating the incident as a case of simple battery.

Islamists now frame the wearing of the hijab as a human rights issue, or even a feminist cause, so that the denial of the right to veil is made equivalent to traditional Leftist issues of gender inequality.

Yvonne Ridley, a convert to Islam, accused human rights organizations of ignoring the “harassment of women who wear the hijab”:

On an almost daily basis there are horrific stories pouring out of Tunisia about how the state police are ripping off the hijabs of women living there.

Some of these women, who are merely fulfilling their religious obligation to wear a hijab, have been assaulted, sexually abused and even locked up in prison by the authorities.

…I would ask them to read the harrowing report below before bellyaching to more journalists about their rights to parade around like Diana-look-a-likes.

It was written by an imam from Tunisia who had it smuggled out and given to me because he wants the world to know exactly what is happening to the women in his country.

Here is a snippet: “The police will randomly make their way into markets and rip the hijabs from women’s heads as well as take away any fabrics being sold to make hijabs…”

My appeal goes out to feminists of all faiths and no faith but please don’t think Muslim women are weak because the reality is that Islamic feminism can be just as radical as western feminism.

Elisabeth Sabaditsch-Wolff reported here on Tuesday about her Counterjihad efforts at the OSCE Human Dimension Roundtable in Vienna. The topic of the meeting was “gender equality, with a special focus on combating violence against women”, and Elisabeth and her colleagues used the opportunity to raise the issue of violence against women under Islam. 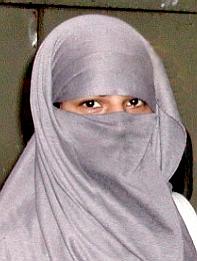 Representatives from various Muslim NGOs were unhappy with this “hate speech”, and protested the interventions put forward by Pax Europa and Wiener Akademikerbund.

One of the protesting NGOs was COJEP (Conseil de la Jeunesse Pluriculturelle, Council of Multicultural Youth), an organization that has its roots in Millî Görüs, a militant Turkish Islamic movement that is popular among European Turks. COJEP responded with an intervention of its own, which was very revealing:

The second point: I am being victimized because I wear a headscarf. [The] Headscarf ban in some participant [sic] States is a form of Islamophobia and is felt as violence against Muslim women by most of them. Forbidding women to exercise their basic rights or barring entrance to public places unless they take off their headscarves is clearly a form of violence. […]

Discrimination against women wearing headscarf decreases their ability to become a part of society, hinders their personal development, prevents them from advancing their cultural knowledge, restricts them from obtaining financial independence, and puts a major obstacle in the way of their empowerment and advancement. [emphasis added]

The frog has now been completely boiled. Not only is the wearing of the hijab a woman’s right, but the denial of that right is a form of violence against women.

This is a shrewd move on the part of radical Islam. At one stroke they have co-opted the trendy rhetoric of domestic violence against women, whilst taking off the table any possible discussion of the real meaning the hijab.

Because the hijab means two things:

In the Muslim world, it signifies the inferior status of women under sharia, and the proprietary interest that men have in their women.

However, in a Western context the hijab has an additional meaning. Like the mosque and the call to prayer, it serves as a territorial marker. Veiled women walking with their men are the human equivalent of minarets. They are claiming the surrounding territory for the Ummah.

And Islam has now adroitly turned the hijab into a feminist issue, thereby ruling any counter-arguments off the turf. Western feminists are bizarrely eager to remain silent about — or even embrace — the inferior status of women under Islam, as symbolized by the veil.

Welcome to the brave new world of Feminislam.