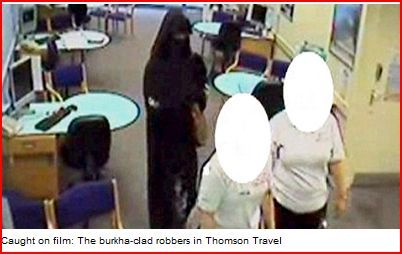 Two police forces are investigating three robberies which have been carried out recently by men dressed in the Islamic garment.

A force spokesman said that in the first, a man dressed in a black burkha went into First Choice Travel in The Broadway, Dunstable, on Tuesday July 7, at around 10.15am.

He threatened two female members of staff with a knife, then took a “substantial amount of cash” and escaped through a back door, police said.

More than a month later, on Sunday August 16, a man dressed in a black burkha threatened two female members of staff at Thomson travel agent in George Street, Luton at about 10.55am.

He made off with a large amount of cash, and escaped through the front door before heading off on foot.

In a third incident on Monday in neighbouring Oxfordshire, armed robbers – one wearing a burkha – stole watches worth £150,000.

They threatened four members of staff, a man and three women, with what is described as a handgun and an axe.

The men then left the shop and got into a waiting black Audi Estate, which then drove off towards of Broad Street.

Police said the men were of Asian appearance and two were wearing dark clothing with their faces covered. The third was dressed in a burkha.

Detectives from both forces have called for any witnesses or anyone with information to come forward.

Detective Constable Steve Guerin, from Bedfordshire Police, said: “Officers are keeping an open mind as to whether these incidents are connected but the pattern the offenders have followed is strikingly similar.”