An unexpected find of the precious metals is being harvested in Somalia. The proceeds from this “gift of Allah” will most likely go to financing the jihad against the government of Somalia. Allah u Akbar says their leader. 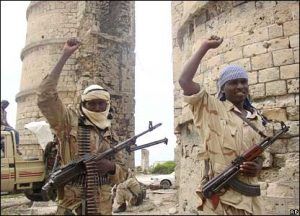 Residents in Marka say al Shabaab has been rounding up anyone seen with a silver or gold tooth and taking them to a masked man who then rips them out using basic tools.

“I never thought al Shabaab would see my denture as a sin. They took me to their station and removed my silver tooth,” resident Bashir told Reuters.

“I met several men and women whose dentures were being pulled out by a masked man they called a doctor. The doctor used a pincer or his gloved hand depending on the strength of the tooth,” Bashir said.

“As you smile your silver tooth accuses you. I was at a counter with my friend when three armed al Shabaab ordered me to follow them,” he added. “I am afraid they want to make money from taking all this precious metal.”

The Islamist group says the gold and silver teeth are used for fashion and beauty, which is against strict interpretations of Islam, residents told Reuters.

The crude dental work has fueled fears of health risks.

“Pulling or replacing teeth may lead to loss of blood and neurological damage. The tooth may break and the remaining piece may cause sepsis,” Mohamed Mohamud, dean of faculty of medicine at Mogadishu’s Benadir University, told Reuters.

Al Shabaab, which means “Youth” in Arabic, is an al Qaeda-inspired militant group that has taken control of large swathes of south and central Somalia.

The group’s hardline interpretation of Islamic law has shocked many Somalis, who are traditionally moderate Muslims. Some residents, however, give the insurgents credit for restoring order to the regions under their control.

In June, al Shabaab officials in one of the group’s Mogadishu strongholds ordered four teenagers to each have a hand and a foot cut off as punishments for robbery.