I don’t think I will make many friends when I say, “It is official, Yanks are wanks”. Are you all so willing to sell out your futures for fear of offending the most offencive? The very type of Islamic teaching that puts all Americans at risk is welcomed in Fairfax? This should be making any American with a right mind break out in Tourettes. 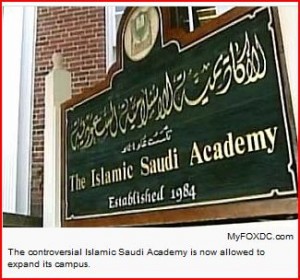 FOX NEWS.. A controversial Saudi-funded academy that teaches strict adherence to traditional Islamic law has been given the green light to expand its Virginia campus — a decision by local officials that infuriates opponents who say the school’s teachings are anti-American.The Fairfax County Board of Supervisors voted 6-4 Monday to grant a zoning exemption to the Islamic Saudi Academy. The officials said the outcome was based strictly on zoning issues, not on what goes on in the school’s classrooms.

That left some in the community outraged.

“How could they … say they are such fine students? They are fine students but they are learning the wrong thing,” academy critic Ruth Mizell said after the vote, according to MyFOXDC.com.

Jim Lafferty, another opponent, vowed political retaliation against the supervisors who supported the expansion.

“We need to resist these people, make it clear they may have bought six votes in there but they are not buying my vote,” said Lafferty, according to MyFOXDC. “We will support — even if it’s Pee-Wee Herman — we will support whoever is running against them.”

The academy was founded in 1984 and has some 1,000 students in pre-kindergarten through grade 12. It is the only Saudi-funded school in the United States.

About 80 percent of its students are U.S. citizens from the area’s Muslim communities. Most students attend classes at a second campus in the Alexandria section of Fairfax.

The plans granted approval on Monday permit construction of a building that would eventually accommodate 500 students.

“The community will get an awful lot of development,” said supervisor Penelope A. Gross. “I think (it) will improve the community.”

The school has undergone a series of high-profile examinations of its religious curriculum, which has been revised repeatedly to remove passages that extolled militant jihad and martyrdom. In 2007, at least one textbook still said that the killing of adulterers and apostates was “justified.”

But students, parents and teachers say the school does not teach intolerance.

“Throughout my whole time in ISA, I’ve never been taught to hate anyone,” said Heba Rashed, 16, a junior at the school.

The school’s curriculum was revised at the start of the 2008-09 school year after the U.S. Commission on International Religious Freedom condemned its textbooks.

Critics of the academy say most of the offensive material has been taken out. But they say the textbooks clearly remain guided by Wahhabism, the fundamentalist school of Sunni Islam that is dominant in Saudi Arabia.

“The stuff about killing, it’s not there anymore,” said Ali Al-Ahmed, the head of the Institute for Gulf Affairs and a critic of the Saudi government, who got copies of the latest textbooks.

Al-Ahmed said references to jihad had been removed from the curriculum. He found that strange, because the idea — which in the Koran is described as “striving in the path of God,” and is not necessarily violent — was essential to Islam.

In the past, textbooks referred to the militant form of jihad. Al-Ahmed said he would have felt better if moderate references to jihad had been kept.

Attorney Lynne Strobel, who represented the academy, said she was pleased with the vote and said the school has undertaken efforts to reduce some of the potential traffic.