As if the cultural identity of indigenous Britons wasn’t diluted enough. 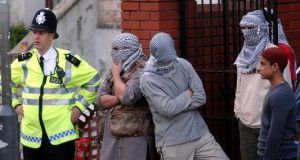 The “earned citizenship” programme to be introduced in December 2010 will grant immigrants a British passport two years quicker than normal if they can show that they have “mentored a new refugee” or been active in a trade union (possibly by going on strike).

The earned citizenship programme forms part of the Government’s Borders, Immigration and Citizenship Bill which claimed that newcomers would have to “earn” the right to stay in the UK and be given a new “path to citizenship.” Initially, Government ministers had said that some form of community work such as running a local scout group would contribute towards gaining citizenship.

Now, however, the Home Office has said that immigrants will win fast track approval for British citizenship if they take part in trade union activities, canvass for political parties, volunteer for a “faith” organisation or “mentoring a newly-arrived refugee.”

Migrants who complete 50 hours of such voluntary work will be entitled to receive British citizenship after six years – two years earlier than if they do nothing. Observers point out that migrants cannot vote until they become citizens, so by offering British passports to those who take part in Labour Party-supporting trade union activities, the Government is effectively growing its own immigrant vote.

There is also no definition of what constitutes a “faith organisation” either. This would easily be simply joining the activities of a local mosque, which is part of many immigrants’ lifestyle choice in any event.

The most outrageous suggestion, however, is that an immigrant can gain two years remission off the passport application process by “mentoring a new refugee.” The absurd situation will therefore arise where immigrants – possibly ‘refugees’ or ‘asylum seekers’ can speed up their applications by aiding other ‘asylum seekers’ to settle in Britain.

As if this was not astonishing enough, the Home Office document which spells out the rules says that employers will be expected to give immigrants paid time off during working hours to complete this “voluntary service.”

The Home Office document says: “We are keen for migrants to participate in our civic and political life and we recognise the important part that political parties and trade unions play in our democracy. Canvassing and handing out leaflets will qualify as active citizenship because it includes interaction with other party members.”