Here is a Stratfor Sitrep on Holbrooke’s request for more international aid for those fleeing the Swat Valley: 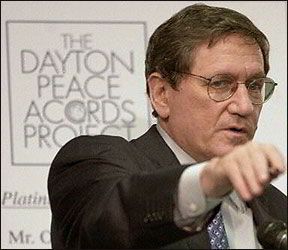 June 4, 2009 From Stratfor.com
U.S. special envoy for Afghanistan and Pakistan, Richard Holbrooke, urged European and Muslim countries June 4 to assist refugees from Swat Valley, Reuters reported. Holbrooke, speaking from the Shah Mansoor Camp, 50 miles northwest of Islamabad, said the United States is providing almost half of all aid to Pakistan and asked, “Where are the Europeans? Where is the OIC [Organisation of the Islamic Conference]?” Holbrooke also said he will meet with Pakistani leaders, including the head of Pakistan’s army, General Ashfaq Kayani, in Islamabad on June 5 to discuss the next phase of the Swat Valley operation.

Where exactly is the OIC? We may remember them for such great public works as Durban conference I and II both of which where designed to demonize Israel while obliterating ‘Islamaphobia’ world wide and attempting to destroy meaningful freedom of speech all over the globe using the veneer of ‘religious tolerance’

The OIC is prepared to invest a great deal of resources into these two activities, demonizing Israel and destroying free speech except for Islam, but they seem to show a rather stunning disregard for the well being of actual Muslims. Pakistan is seeing a refugee crisis of staggering proportions. I mean real refugees not fake ones as in Gaza or West Bank where territorial wars occasionally see Muslims seeking refugee status within Israel to avoid the mercenaries from Hamas but actual refugees where hundreds of thousands of Muslim men women and children are fleeing parts of Pakistan where the Taliban and Al Queda are at war over control and implementation of sharia law. The OIC or indeed any Muslim state such as oil rich Saudi or Iran seems not be offering one farthing to the hungry and desperate who have fled their homes and traditional lands due to what is likely Saudi and Iranian funded terrorist activity in these areas.

(As a post script I linked above to a PressTV article about Holbrooke and the refugee crisis. Here is the link again. Read the article by all means but do stay for the comments and think those are the people we are importing in the hundreds of thousands even the millions to the western world. At least it answers the great question for me, ‘For whom was the caps lock invented’.)