Not that anyone was expecting this Muslim family to obey the law in a country they are at war with. 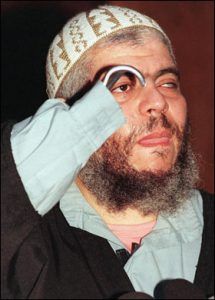 Three sons of jailed Muslim cleric Abu Hamza have been sent to prison for their involvement in a £1m luxury car scam.

Judge Gregory Stone QC, sentencing seven men for their involvement in the case, said it involved “serious criminality” and he had no alternative but to jail them all.

Kamel, of Acton, west London pleaded guilty to dishonest handling of stolen cars and money laundering, and received two and a half years.

Mostafa, also of Acton, had pleaded guilty to two counts of fraud, which involved the use of a false French passport and a utility bill, and was jailed for two years.

Ghailam, who pleaded guilty to conspiracy to defraud and was described as a “key player”, was jailed for four years.

The court heard the gang exploited a loophole in the vehicle registration system to target expensive makes including Mercedes, BMW and Range Rover left in long-stay car parks.

Pretending the vehicles were theirs, they tricked the DVLA into transferring ownership to an alias and sending new log books to front addresses.

Keys were then obtained from dealers and the cars stolen, before being sold to unsuspecting buyers or used as collateral to take out loans which were never repaid.

The value of the vehicles if they had been sold as new would have exceeded £1m.

Mohammed Chiadmi, 31, another “key player”, received four years, as did his brother Abdul Chiadmi, 22, who was said to have played an “important role”.

Khalid Jebari, 22, the operation’s driver, was given two years on handling charges plus two years for possession of Class A drugs with intent to supply, making a total of four years.

Hamza Mrimou, 27, who pleaded guilty to conspiracy to defraud, was jailed for three and a half years.

Abu Hamza, 50, who preached at a London mosque, was jailed for seven years in 2004 for soliciting murder and inciting racial hatred.

He now faces extradition to the US for allegedly setting up an al Qaida training camp.