Nice to see England sweeping up the last remnants of it’s own history and culture. Now that it is an islamic state there is no point in the unnecessary expense of infidel rituals symbols and institutions. The British, ever fastidious in appearance are doing their usual good job of ridding themselves of what remains of their actual English heritage. The monarchy itself may be allowed to remain so long as the lineage changes. Perhaps the Saudis can spare a prince or two. Lots of room at Buckingham for a royal harem. Just so long as they know, Arab Muslims will never accept white people as equals if they memorize Koran and move right into mosques. A quick look at the Sudan or an examination of the Barbary wars should be sufficient evidence. But never mind carry on England.

HAMLET
Ay, marry, why was he sent into England?

First Clown
Why, because he was mad: he shall recover his wits
there; or, if he do not, it’s no great matter there.

First Clown
‘Twill, a not be seen in him there; there the men
are as mad as he.

A medal established by the Queen is being withdrawn after it was declared unlawful and offensive to Muslims and Hindus.

The cross-shaped honour – The Trinity Cross of the Order of Trinity – has been handed to distinguished members of the former colony of Trinidad and Tobago.

Cricketers Brian Lara and Garfield Sobers are among those who have received the medal along with diplomats and politicians. 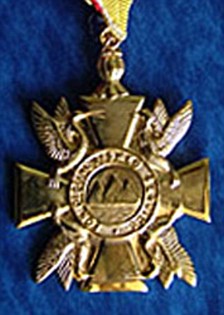 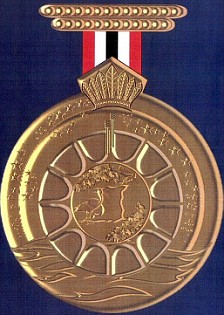 The old Trinity Cross (left) is replaced with the Order of the Republic of Trinidad and Tobago, which has removed any Christian symbols

The Christian name and cross are now being replaced with the Order of the Republic of Trinidad and Tobago – a circular medal featuring a sun, stars, water and a map of the islands.

The Privy Council, made up of 12 law lords, ruled the merit decoration was unlawful because it discriminates against non-Christians.

Now other honours are being reviewed over their references to Christian Saints or symbols.

The Queen established the Trinity Cross in 1969 and it took precedence over all other decorations except for the Victoria Cross and George Cross.

But questions at the time of its creation were raised over the Christian nature of the words ‘Trinity’ and ‘Cross’. Some of those nominated for the award have refused to accept it.

After the Law Lords decision, the Maha Saba attorney Anand Ramlogan told local newspaper Newsday: ‘It’s a vindication of the 40 years of disquiet and unease silently suffered by the Muslim and Hindu communities whose legitimate grievance with the Trinity Cross was flippantly dismissed by successive governments.’

The Maha Sabha, the Hindu organisation, and the Islamic Relief Centre Ltd have been fighting to get a new non-religious order of merit since 2004.

The High Court in Trinidad and Tobago ruled the decoration discriminated against non Christians but said it did not have the power to invalidate the royal order.

Judge Jamadar said: ‘The Trinity Cross – the nation’s highest award – is strictly a Christian symbol, and as a result, it discriminates in a multi-religious society.’

The islands’ government last year announced a new award the Order of the Republic of Trinidad and Tobago.

Trinidad and Tobago, which gained independence in 1962, is a multi-religious nation with large groups of Catholics and Hindus. Around 24 per cent of the populartion is Hindu, and five per cent is Muslim.

The Queen is expected to visit in November when the islands host the Commonwealth Heads of Government Meeting.

A review of the British honours system by the Commons Public Administration Select Committee in 2004 recommended reducing the number of decorations from twelve to four, with the new proposed titles having no reference to the Cross or Christian saints.