Don’t judge Michael Ignatieff too harshly for staying out of the limelight while the story of Ruby Dhalla’s alleged mistreatment of two foreign household caregivers explodes. If you’d spent the last 20 years lecturing everybody in sight about the rights of the most vulnerable, you’d probably want to avoid this mess, too. Mr. Ignatieff has apparently turned the file over to the man he keeps around for exactly such situations: Bob Rae, whose observations about Dhalla contained one of those mystifying political locutions one sometimes gets from men who are trying very hard not to say what they are thinking: “She [Ms. Dhalla] feels very strongly that the allegations against her are not true.” 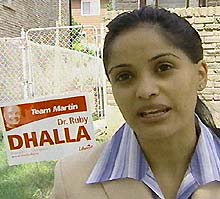 If they are true, the once-up-and-coming Ms. Dhalla — young; telegenic; female; ambitious; “multicultural,” as they say — will soon be chasing down job leads in the private sector. Her foreign caregivers Richelyn Tongson, 37, and Magdalene Gordo, 31, say their 12-to-16 hour workdays were spent not only tending Ms. Dhalla’s mother, but washing cars, shining shoes and performing janitorial services in a family-owned chiropractic clinics — all for $250 per week. (That works out to about $3.50/hour, about a third of what you can earn at a fast food restaurant.) Moreover, the Dhalla family did not take the legal steps under the Canadian government’s Live-In Caregiver Program that would permit the two women to live and work in Ms. Dhalla’s house.

Ms. Tongson also says that Ms. Dhalla personally took possession of her passport and birth certificate at the outset of her employment, and kept them for several weeks. This in itself, ignoring the other allegations, would be extremely questionable behaviour, redolent of the tactics used by employers of servants in places such as Dubai to gain leverage over foreign workers. Ms. Tongson’s testimony that she was made to sign a formal statement declaring “I can take my papers back any time when ever [sic] I want” — a statement she physically provided to another newspaper — would suggest that the family anticipated there might be some sort of problem later and took a clumsy step to pre-empt criticism.

If the passport was taken, whoever took it away was, at the very minimum, guilty of abominable judgment. The same goes for the caregivers’ accusation that they were paid just $250 a week (well below market-rate for a caregiver in the GTA). The accusation that the workers spent little time doing work described in the application made on their behalf to the Foreign Worker Program, if true, would also signal improper behaviour.

There have been suggestions that Canadians who have a demand for family caregiver labour will be sympathetic to the Dhallas’ situation. Thousands reading this editorial must be in similar situations vis-à-vis older relatives; but most will not have used the Foreign Worker Program to save a buck, or indeed hired any help at all.

Mr. Rae says Ms. Dhalla “has a right to defend herself, and there will be full investigations, I’m sure at both the federal and provincial level” — which is no doubt true. But for her own part, Ms. Dhalla has gone further, telling the media that “anyone who has ever worked in our home has been treated with a lot of love, with a lot of care and compassion.” The mere fact that two women in her employ have stepped forward in a move that will likely ruin her political career, we believe, would seem to suggest otherwise.