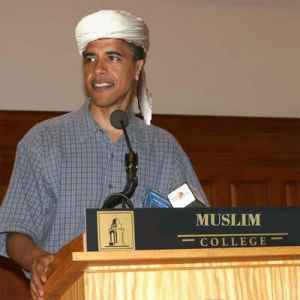 One year ago I wrote about Obama’s Muslim connection. No matter how strong this connection was, the main stream media and ultimately Jewish Americans ignored it.

“The person who made me proudest of all,” Obama wrote, “was Roy. Actually, now we call him Abongo, his Luo name, for two years ago he decided to reassert his African heritage. He converted to Islam, and has sworn off pork and tobacco and alcohol.”

On February 27th, Barack Hussein Obama said the Muslim call to prayer is “one of the prettiest sounds on Earth.”

Although Obama played the Christian card while campaigning, he is playing the Muslim card now in such a blatant fashion that even I am astounded.

Here is his record to date after inauguration,

For decades now this is what the State Department has wanted but couldn’t say so publicly. As I pointed out in Give the Palestinians what they want or else, there is a coordinated attack under way to bring about the downgrading of the US/Israel relationship.

In the last few weeks, I posted many articles which made this point. Here are two.

The West is tiring of Israel

‘I have every reason to believe, based on what I’ve seen at my level of [security] clearance especially over the last several years, that Israel will soon be completely on their own… or worse.’ When asked what could be worse than losing the support of the United States, he stated: ‘when our administration provides more support to Arab countries [with] financial and military aid, undercutting Israel’s defense efforts all while pushing Israel to succumb to the pressure of unreasonable demands designed to end with their political annihilation as a nation.’

The CIA report predicts “an inexorable movement away from a two-state to a one-state solution, as the most viable model based on democratic principles of full equality that sheds the looming specter of colonial Apartheid while allowing for the return of the 1947/1948 and 1967 refugees. The latter being the precondition for sustainable peace in the region.”

These are only a few of the articles published since Obama’s inauguration which provide the handwriting on the wall. The core issue that the West is now recognizing is, that given the enmity of the Arabs to the state of Israel, the Sate of Israel is doomed and shouldn’t be supported by the US to her detriment.

DEBKAfile’s Washington sources report that the Obama administration is on the threshold of a major rapprochement with Tehran, a reversal of US policy dramatic enough to block out international sanctions. Iran will be allowed to keep its nuclear program, including military elements and enriched uranium stocks, up to the point of actually assembling a weapon. [..]

The US president is willing to ditch Israel as a friend. This will be brought home to Jerusalem when he makes his big speech on April 7 appealing for a grand US-Muslim global reconciliation. The US president is preparing to tie a Palestinian-Israeli settlement – on Washington’s terms – to such unrelated issues as Afghanistan and Pakistan as the currency for purchasing Muslim and Arab backing for accommodations of these outstanding terrorist fronts.

To lend wings to Obama’s outreach to the Muslims, White House circles Monday, March 30, leaked word that his team took a hand in persuading Israel to accept a ceasefire which cut short its anti-Hamas operation in Gaza in January. The radical Islamist terrorists had to be spared from total defeat by Israel and their leaders from capture otherwise Assad, as their backer, would be restrained from resuming peace talks with Israel for some time.

The ceasefire gave Assad enough political room to continue the negotiations without losing credibility in the Arab world.