Appeasing the Taliban by handing over the Swat valley has not stopped the violence against government forces and average citizens of Pakistan. I can only imagine the speech Taliban leaders gave their minions as they explained to them the peace deal they had agreed to with Pakistan. I suspect it was something like, ” We have told the Pakistan government [spit] we will stop jihad on them. So when you are killing them don’t say you are Taliban.” Followed by rubbing of palms and evil laughter.

LANDI KOTAL, Pakistan (Reuters) – A suicide bomber blew himself up in a crowded Pakistani mosque during prayers on Friday, killing at least 48 people, a government official said.

“So far we have counted 48 bodies,” Tariq Hayat Khan, the top administrator in the Khyber region in the northwest of the country, told reporters.The death toll could rise, perhaps to 70, he said. About 70 wounded had been taken to hospitals, he said.”It was a suicide attack. The bomber was standing in the mosque. It’s a two-storey building and it has collapsed,” he said.

Police initially said a bomb blew up at a police post next to the mosque near Jamrud town.

There was no claim of responsibility but Islamist militants opposed to the government’s support for the United States have mounted a violent campaign against the security forces and others.

Militants had earlier threatened to blow up the police post next to the mosque, residents of the area said. 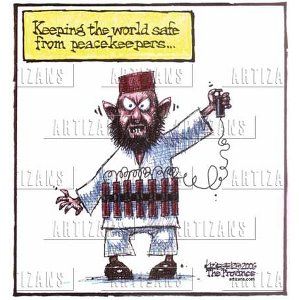 “It’s surprising, those who claim that they are doing jihad and then carry out suicide attacks inside mosques during Friday prayers,” Khan told Geo TV.

2 Replies to “48 murdered by mad Muslim”