What can possibly be the motive for the various levels of government in the UK to so selectively enforce laws that can account for the article below? Can it merely be fear? Have the British become so complacent and timid that they fear any violence at all and move straight to surrender? Often on Vlad we have posted articles showing the dhimmitude of the British but each week something occurs that eclipses the previous events. Last weeks arrest and banning of Geert Wilders at Heathrow airport and now permission to stage a march demanding sharia law in place of British common law, the system upon which Canadian American and Australian legal systems are founded not to mention India and numerous other nations, all of which are the only decent places for human habitation on earth I might add. The UK also agreed to banish a traditional English parade as ‘racist’. Selective enforcement at its most pernicious.

Why no revolt by the public? They care clearly caught in a pincer attack. The violent Muslim immigrants on one hand, and the fear of arrest and having a relatively comfortable life destroyed by their own governments on the other.

Remember, it was not Geert Wilders who first compared Koran to Mein Kampf. It was W. Churchill in his nobel prize winning book on WW2, The Gathering Storm. 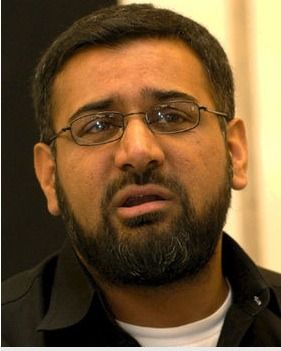 The startling move comes just days after processions celebrating St George were banned for being racist.

Choudary was given the green light yesterday despite a previous demonstration in which some of his supporters chanted: “Bomb the UK”.

Publicity for the march, in the East End, carries 41-year-old Choudary’s personal mobile number and says the aim of the campaign is to “emulate the Prophet and his companions, by calling for Islam and speaking out against the oppression of man-made law”.

It says that Britain is full of “disbelievers” who are involved in prostitution, gambling, alcoholism and worshipping other gods.

The publicity says women are welcome to join the march but they must walk at the back of the procession as “strict segregation will be enforced”.

The demo comes 18 months after three of Choudary’s supporters were jailed for soliciting murder in a London protest against cartoons of the prophet Mohammed published in Denmark.

That was when some demonstrators chanted “Bomb the UK” and “Europe, you will pay with your blood”. Organiser Choudary was fined.

Today’s march won permission after a council withdrew funding for a St George’s Day parade in the Midlands – on the grounds that it was “racist”.

“The British establishment is trying to take away the British voice but other cultures choose to force their way of life on us.”

More on Chaudery from a few sources…

The lawyer, who recently praised the Mumbai terror attacks, said anyone becoming intoxicated by alcohol should be given 40 lashes in public. He claimed alcohol was “the root of all evil”.

The 41-year-old made the remarks on his website Islam4UK, which argues that Britain should become an Islamic state ruled by Sharia law.

Mr Choudary also used the plight of George Best, the former Manchester United footballer who died aged 59 in 2005 after a long battle with alcoholism, to illustrate why it must be outlawed.

He wrote: “Under Islam, all harmful intoxicants will be banned unequivocally, regardless of their classification or their profitability in retail marketing.

“The Final Messenger Muhammad condemned the manufacturing, transporting, retailing and consuming of alcoholic beverages over 1,400 years ago and equated it with being one of the roots of all evils.

Mr Choudary argued that alcohol should be “removed from society”.

He also wrote that everything would be “sound” and “put right” if Sharia law was introduced in the UK, adding: “Islam is undeniably the only real solution for Britain’s problems.”

From another UK Blog..

Lots of information and links. Check the link yourself. Its well worth it. This mam Choudary goes beyond fifth column and perhaps even beyond treason as there appears not to be any presence at all to represent England its values customs or traditions but an open call to jihad and the deaths of all who stand in the way of the Islamification of the west, the UK in particular.

7 Replies to “March for sharia in Englandistan”