Frankly its probably worse everywhere than the main stream media will allow us to be aware of.

Here is from an English language danish Blog..

This is a photo from a fire started just outside my appartment. The fire was dangerously close to my car but luckily the skilled firemen got the fire under control very quickly. The reason for the riot is apparently because of the re-publication of the famous Muhammad drawings in the Danish newspapers. I really think that “Respect” should be a mandatory course taught in primary school. To me it seems like respect for one another has simply disappear from this world. Everyday I see the lack of respect between people, whether it’s between men and women, christians and muslims, employers and employees, buyers and sellers, children and adults. Oh dear oh dear, what has this place come to. Please, if you read this, respect the people and things around you! 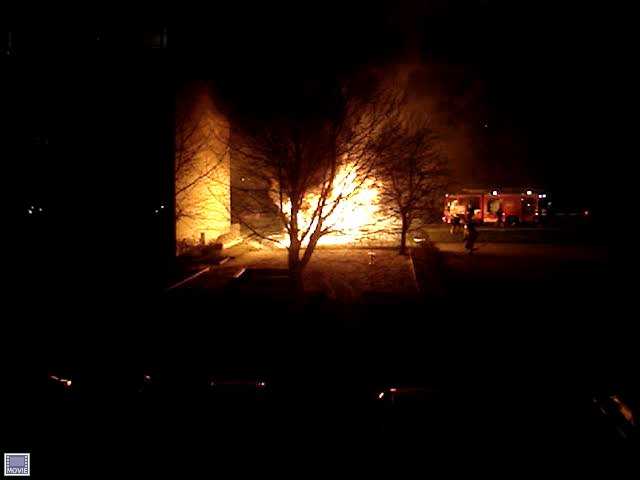 No disrespect meant big al but I don’t think you get it yet. Denmark clearly ‘respects’ the immigrants who started this fire and clearly respects Islam. Its the Muslims who come to Denmark that don’t respect your car.

Or you. Or Denmark. Or freedom of religion and mostly, individuality.

Then there is this…

Islamists in Gellerup-park outside Aarhus believe that the area is their property!

Islamists in the Gelleruppark outside Aarhus believe that the area is their property!

They have been terrorising all other citizens because they are not Muslims – IS THIS NOT RACISM? Now they have managed to dispel many of Greenland families from the area, even with the help of Aarhus municipality, which must now have a really bad taste in the mouth.

Aarhus municipality moved the Greenland families instead of asking the police to arrest and deport Islamists! The police have also helped the Islamists because complaints from Greenlanders were ignored, and police failed to take any action before it finally came out in the media.

Yet another example of how Denmark helps and protects criminals, but ignores the victims of their crimes – it is a very sad trend justified under the guise of human rights and naive softness. A striking example of how we do not learn from history.

Our government and the Danish Parliament behave like the coalition during the war, but the effect is the same. We help and cooperate with society-destroying forces and sell Denmark to foreigners, who have no good intentions for the Danes. I PRAY FOR HOLGER DANSKE TO WAKE UP AGAIN! His spirit at least exists in the form of the association SIAD (Stop Islamiseringen of Denmark), which has many and an increasing number of supporters, so we can re-establish our lost democracy and freedom to be different, and to live in our own country.

It should be clear to everyone that Islam is a racist religion which does not tolerate dissidents and other religions, and is fighting democracy in every way. Islam is working through fear and terror, just like their NAZI allies. Yes, it is not so well-known to many people, but the Middle Eastern Islamists, especially those in Palestine, had a very close collaboration with Hitler and Nazi Germany both before and during World War Two.

They mutually benefited each other, both in terms of elimination of the Jewish people, but the Islamists also helped Hitler to keep England employed in Palestine and North Africa by means of riots and demonstrations in those areas. Hitler thought that he could govern in Europe as it suited ham. He was even considered to be the 12th Imam as he sent money and weapons to the great mufti in Jerusalem to help expel the Jews from the area – When Germany wanted it, the jewish immigration to Palestine was opened again.

Another version of “the final solution”. All this information can be found in a recently published book written by two researchers Klaus-Michael Mallmann and Martin Cüppers and released on the Information Society Publishers. It is not encouraging reading! We can more or less say that war is not over yet and it is not an ordinary war, but something even more dangerous – an invisible army of hidden weapons with a shield of women, children and a gross exploitation of our democratic society.

Islamists in Gelleruppark and in the rest of Denmark should be treated as law breakers and should all be sent back to their respective countries – I am sure they will be received as heroes! As for their autonomous collaborators who should be punished according to Danish law, are they just as societal-saboteurs as the informants during the war.

Now Danish people must wake up and act by boycotting and reversing all steps towards Islamic influence. If Muslims want to live in Denmark, they must comply and become integrated in the Danish society on danish terms.

As the claims made above may seem absurd to many people not yet aware of the connection between Hitler and the Grand Mufti of Jerusalem, watch the material below.

From a German historian