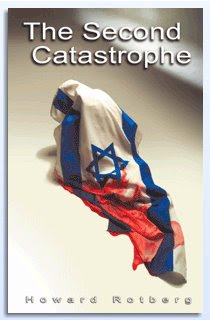 Canadian Ezra Levant got a notice from his province’s ‘human rights’ commission on Thursday that a complaint against him for ‘discrimination’ that was filed by the Edmonton Council of Muslim Communities for publishing the famous Mohamed cartoons in Canada’s Western Standard has been dismissed (Hat Tip: Little Green Footballs). Unfortunately, the next victim of Canadian moonbattery is already on the firing line.

Howard Rotberg is a Canadian lawyer who has written a novel called The Second Catastrophe (you can order the book through that link). It’s a novel about a professor who is writing a book about the Jewish people and the State of Israel whose daughter is injured in a terror attack. Rotberg was invited to lecture about the book at the Waterloo, Ontario branch of Chapters, the largest bookstore chain in Canada. Some unexpected ‘guests’ showed up. Here’s part of his description of what happened (Hat Tip: Boker Tov Boulder):

A quiet Sunday afternoon at the Chapters store in Waterloo, Ontario. A nice, relaxed informal lecture to a small group about The Second Catastrophe, my new novel.

I had just started talking about why I had written the book — about how, after the failure of the Oslo process, and Arafat’s rejection of Barak’s generous offer for a two-state solution at Camp David II, the Palestinians had started the Second Intifada. I mentioned how disappointed a lot of us were to see that Arafat apparently did not want a state alongside Israel, but one in place of Israel.

That was a mistake.

I now realize that I was in Canada, where only politically correct speech is protected.

I was in Canada, the land of cultural relativism, where the most important value is tolerance. Criticizing any other country or culture is a breach of the now distorted policy of multiculturalism. Now, I would pay the price.

If I had only known how big a price.

A young man came in and sat in the second row. He picked up a copy of my book from the table, took a perfunctory look at it, and started interrupting me.

“You think all Muslims are terrorists,” he asserted.

“I do not,” I replied, as categorically as possible.

“Well, that’s what your book says,” he retorted.

It looked to me as if he had just taken a few glances at it, so I replied: “Have you read my book?” He paused and then said, “Part.”

I decided not to take him seriously and I continued. Another mistake.

Suddenly a man appeared, standing off to my left, and started into a rant. It was something about how the Americans and the Israelis are the real terrorists, and that democracy is really fascist. He was scary.

University of Waterloo Professor Dennis Stoutenburg was there and tried to calm the man.

“Sir, this is a lecture. Why don’t you sit down and listen?”

The first man identified himself as a Palestinian, and the second as a Kurdish Iraqi.

Then they took turns talking — and talking. It was apparent that they were not going to let me speak any more. They had decided to take over my lecture.

The Palestinian was shouting something about how the Israelis kill five Palestinians a day. Some audience members had heard enough.

“Be quiet and let the author continue with his lecture; he has the right to give his lecture,” said one audience member.

“He has no right to lecture if he is going to say things in support of Israel,” said the Palestinian. His words cut me like a knife.

Then the Iraqi started in. Again someone pleaded with him to be quiet so I could lecture. Then came the words that still ring in my ears: “He’s a f****** Jew.”

Read the whole thing. Bottom line: The book has been banned from the largest retailer in Canada, the book store issued a press release claiming that Rotberg said all Muslims are terrorists, and Rotberg has launched a lawsuit (I would assume against the bookstore chain for defaming him in its press release, but also apparently against the hijab-wearing clerk who may have been involved in recruiting the Arabs to attend the lecture), which is to be heard on August 27 and 28. Mr. Rotberg now has a blog here.

I urge you all to visit his blog and consider buying the book. One has to wonder what the future holds for Jews, conservatives and supporters of Israel in Canada. It doesn’t sound very promising.