First, the YT video from March 17

And another one. This one shows that there are at least some devout muslims amongst this group

The mystery travellers, who arrived in Thailand in three groups last month with the assistance of human traffickers, claim to possess Turkish extraction. Turkey and Australia have been named as their preferred destinations.

But these people – mostly young families – are suspected of belonging to China’s persecuted Uighur minority. If they are returned to China, their fate is bleak, say the human rights groups.

Today there were dramatic developments following a report published in the Financial Times from Beijing that China wants the men, women and children returned there as fast as possible. 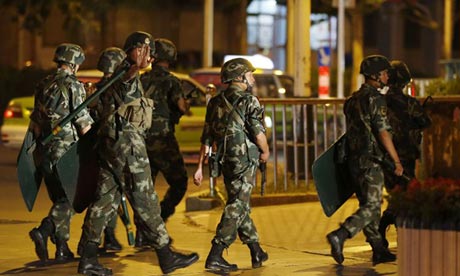 A government paramilitary patrol in Xinjiang, the restive Uighur region of China where a deadly attack on a police station has taken place. Photograph: Reuters

A total of 11 people were killed in an assault on a police station in the north-western region of Xinjiang, the local government has said. It is the latest in a series of attacks pointing to growing unrest in the area.

Two auxiliary police officers and nine attackers were killed in the incident on Saturday afternoon, the Xinjiang regional government said in a statement posted on its microblog.

M sent in the following report based on a google translate. Video below:

At 12:05 on October 28, 2013 Xu , a light-colored jeep Xinjiang license by the nanchizi south , turn right into rapidly moving from east to west Chang’an Avenue sidewalk . Driver side continued whistle warning passers- side pedal to the metal to break through isolation belt speed ahead .

In successively hit by dozens of less than escape after the car lost control and eventually crashed into the south side of the Golden Water Bridge guardrail Tiananmen East , SUVs then fire and explosion .

Reporters learned from the Beijing Public Security Bureau , the Xinjiang the vehicle license plate number for the “New A45559”, in addition this car off-road vehicles has also been used three different licenses , namely the “new A82Q53″, ” new C96063″ and “New BM7831”.

Police have mastered the sport utility vehicle three dead identity of the two , are the Uighurs in Xinjiang , male, one aged 43 and another aged 25 . They are:

Read more at + video on the page :