This dropped so fast it didn’t even have TIME to become a crazy conspiracy theory by far right wing crazy people. It just went straight to reality and did not pass Twitter and collect 200 followers. 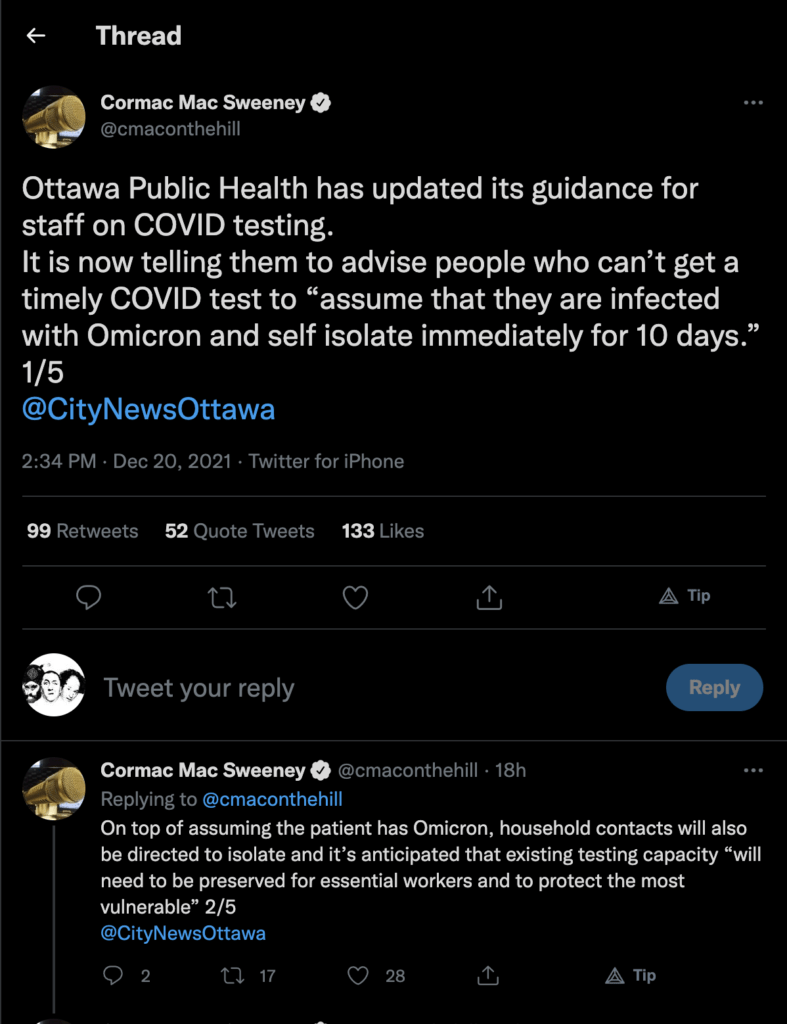 Ottawa Public Health (OPH) says COVID-19 testing is no longer available for everyone in a timely manner due to a surge in demand, so it’s asking anyone unable to access a test to assume they are infected with Omicron and self-isolate for 10 days from the time their symptoms began.

In a COVID-19 update, posted to OPH’s website on Monday, December 20, Associate Medical Officer of Health Dr. Sarah Funnell, and Medical Director Dr. Sarah Erdman explain household contacts of anyone in need of a test, regardless of their vaccination status, will also be directed to isolate.

“This important change in contact management guidance is due to the significantly reduced vaccine effectiveness of two doses against the Omicron variant,” they wrote. “Please note that the situation is evolving rapidly, and guidance is subject to change quickly.”

The Twitter thread is good though. Please check it out here.

So. In 2019, a “case” meant that a sick person went to a doctor, got a differential, which I assume is jargon for a series of tests and measures in order to establish a diagnosis, and then once it was determined what the person was sick with, they became a “case” of that thing. As far as I know, this practice is only still done in one Thai hospital, where they never had an issue with Covid, because they did not do everything that follows:

In 2020, a case meant anyone they could pin the label on without stabbing their foot with it. Ideally, run a PCR test with such a high cycle threshold that you get a ton of false positives and can call them all cases. All jurisdictions in the world appear to have agreed that anyone dying from any cause that had, or could have had a positive PCR test, was to be considered a Covid death. This has been established in countless articles (and some personal experience) but was also established under oath in a court room by Rhode Island’s chief health bureaucrat, who clearly stated that two children shot to death in the head are listed as covid deaths.

So now we have a new definition of cases, which is medically useless, but politically brilliant.

But before anyone could even see this coming, now we are to consider people who are “asymptomatic”, (the aufhaben/dialectic replacement term for healthy) as sick and highly contagious if they merely cannot get their hands on a government issued and highly flawed test, because there are not enough of them, supplied by that same government. Trying to establish the accuracy of the tests is like reading Hegel. Because you have to look at all kinds of false assumptions and reworked definitions to get to the punchline. But using the old fashioned view of a sick person, which is to say that they are actually sick, the new antigen tests appear to be right maybe half the time. But that doesn’t matter since, well you are trapped by this policy merely for not being able to get the test, despite your fresh return from a 3 mile run.

One Reply to “Because Science!”