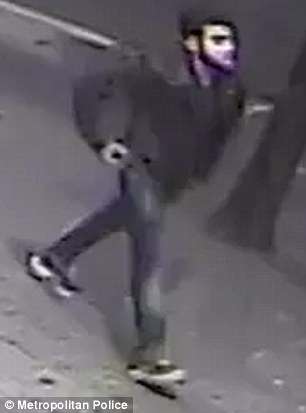 A sex fiend who brutally raped a young American tourist yards from Trafalgar Square in central London is being hunted.

Police say the 22-year-old woman was holidaying in the capital when she was kicked out of a taxi with a friend in the early hours of Sunday June 3rd.

They said she has ‘no recollection’ of what happened after her friend was sick in the car.

Police were called when she went to A&E after waking up with injuries consistent with being raped.

French leftists in the commune of Montfermeil were angered by the inclusion of the term “Islamist terror” on a plaque commemorating hero police officer Arnaud Beltrame who traded himself for a hostage during a terror attack and was killed in March.

Local politicians of the Front de Gauche, or Left Front, said their objection to the wording was because it supported a view of “religious war”, Le Parisienreports.

4. This is how sharia law becomes the way of things. Sweden cancels music festival because of all the muslims raping Swedish girls at them. So now Sweden is a large step closer to being sharia compliant.

(So far so good with Premiere Ford)

6. Jihad Watch article on the law suit against the Ottawa Public Library on the cancelation of the film, Killing Europe.

(The crafty lack of description or any identifying motives for this murder in Turkey is now quite typical for the BBC and official Western media in general. One is now forced to speculate since the news agencies we pay for in the 10 digits actually misinforms us for the purposes of their own agendas. In this case, I would wager islamist ones as she is a flagrant violation of sharia and is also a flagrant example of a woman who is successful and famous and unabashedly flaunts her reproductive fitness.)

An up-and-coming Turkish singer and the owner of a nightclub have been shot dead in an attack on the club in the south-coast resort of Bodrum, local reports say.

She was hit as she crossed the stage of the club, Turkish media report.

The attackers drove away from the scene and four suspects were later detained at a police checkpoint.

Tulu is described as the daughter of immigrants from Bosnia-Herzegovina.

8. Saudi Arabia Presses Ahead with Canal to Make Qatar an Island – Reports

Riyadh plans to dig a waterway along the border with Qatar to cut off its neighbor from the mainland amid a continuing standoff between the two countries, Gulf News reported.

Five international companies with expertise in digging canals have so far submitted tenders for the construction of the 200 meter-wide (656 feet) and 20 meter-deep (65.6 feet)canal to run inside the territories of Saudi Arabia and about one kilometer from the country’s official border with Qatar.

The winner will be announced within the next 90 days.

In a tweeted message on Tuesday, Saudi royal advisor Saud al-Qahtani congratulated his fellow countrymen on the start of what he described as a “glorious” project that will “turn Qatar into an island.”

Thank you Richard, M., Wrath of Khan, Xanthippa, EB and many many more. The last 24 hours have been richer than even usual in Reader’s news links. This Saudi one probably isn’t the first time in history that something like this was done. Its sort of a Great Wall of China but next level. The Great gutter of Qatar.