An original translation from Leipziger Volkszeitung (note the bias of the article, even though the refugees were armed, and the people who needed medical treatment were the Germans):

Wurzen: Five Wounded In Clashes At The Asylum Accommodation in Dresdner Straße

In Wurzen, on Friday evening, two groups, young Germans and foreigners massively clashed. Two men were wounded gravely in this. Prior, allegedly, refugees were pursued and threatened. State Protection is investigating for a xenophobic background.

Wurzen/Leipzig. Five people were wounded Friday night in violent clashes at a residence inhabited by refugees in Wurzen, two of them gravely. According to police investigations, about 30 young Germans clashed with a smaller group of foreigners. Two of the Germans were gravely injured by knife stabs into the upper legs, police announce on Saturday. Additionally, three people in the asylum seeker accommodation in Dresdner Straße were lightly injured, said police spokesman Andreas Loepki to Leipziger Volkszeitung. Police currently cannot rule out a xenophobic background. Already last year, police had to intervene in clashes between asylum seekers and Germans.

After the attack, Germans storm refugee accommodation
The confrontations lasted for about an hour and triggered a large action by the police. 30 to 40 officers were in action from 10:40 PM on. From what is known from witnesses’ accounts at the moment, it all started with a verbal argument between the two groups at the park at the train station, followed by a chain of assaults. The asylum seekers withdrew into their residence in Dresdner Straße. „Subsequently, two Germans walked up to the residence, banged against the door, and damaged a glass“, reports Loepki.

A smaller number of refugees then chased the two Germans, but turned around when they found themselves facing a group of 30 persons. „Due to their appearance, the foreigners – pursued – went back to their accommodation, which shortly after was left by probably twelve inhabitants, armed with knives and clubs“, says Loepki. In the ensuing clash, two Germans suffered knife wounds in the upper thigh. A taser was used, too, apparently. Several Germans subsequently stormed the residence where further clashes occurred.

No arrests made
To part the rival groups, all patrol officers from Grimma precinct were summoned, and forces from Leipzig were called to Grimma. The officers asserted the identities of those involved on-site. There were no arrests made. It was still unclear who committed the attacks. This needs to be proven in each individual case, says Loepki. Witnesses are being questioned on that.

The cause of the clashes will hopefully be determined in the investigations, which have been opened for particularly severe breach of the peace of the land. State Protection, too, has become involved in the case. An extremist and racist background of the deeds is probed.

Already in June [2017], clashes between Germans and asylum seekers in Wurzen led to a large police action. Back then, approximately 100 persons had congregated on the town’s market square, and shouted slogans in front of a residence in Wenceslaigasse. Prior to that, residents of the house had physically attacked two locals*.

Translator’s note:
In June 2017 in Wurzen, two locals complained to five refugees who were playing loud music after midnight and disturbing the night’s peace. In response to that, the refugees attacked the men with wooden folding chairs, wounding them so badly that they needed treatment in the hospital. The next day, about 100 people gathered on the market square and “shouted slogans”. “Police prevent attack on asylum seekers in Wurzen”, Leipziger Volkszeitung, June 12, 2017. 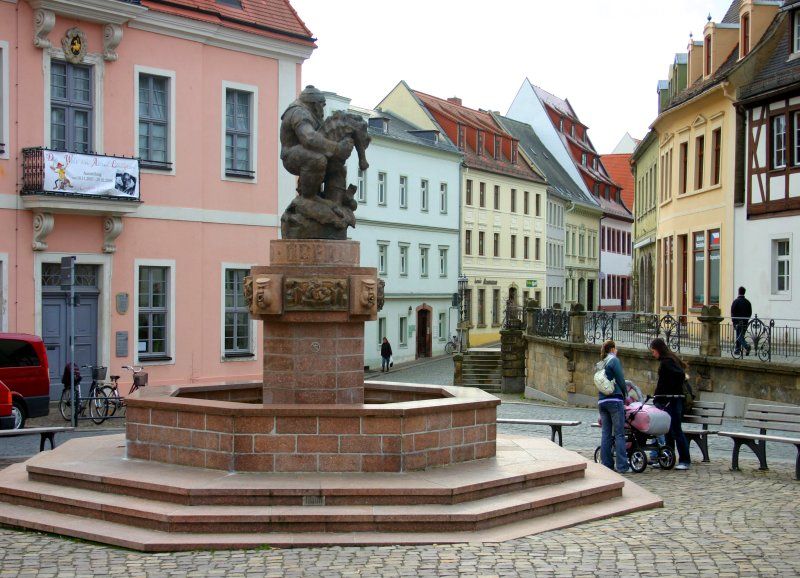 The small town of Wurzen in Saxony, normally famous for being home to the author Joachim Ringelnatz

8 Replies to “Germany: Violent Clashes Between Locals And Refugees in Saxon Small Town”