The stream of allegations is not ending. It appears as if, while Diversity was pushed onto the Berlin Police (see also this interview with the Deputy Police Chief here), the issues of the ordinary officers, policemen and firemen alike, were not so high on the list of priorities.

2. An original translation from Focus:
Grievances in Berlin Police Academy
The Long List of Allegations Against the Deputy Chief of the Berlin Police
By Joseph Hausner
November 03, 2017 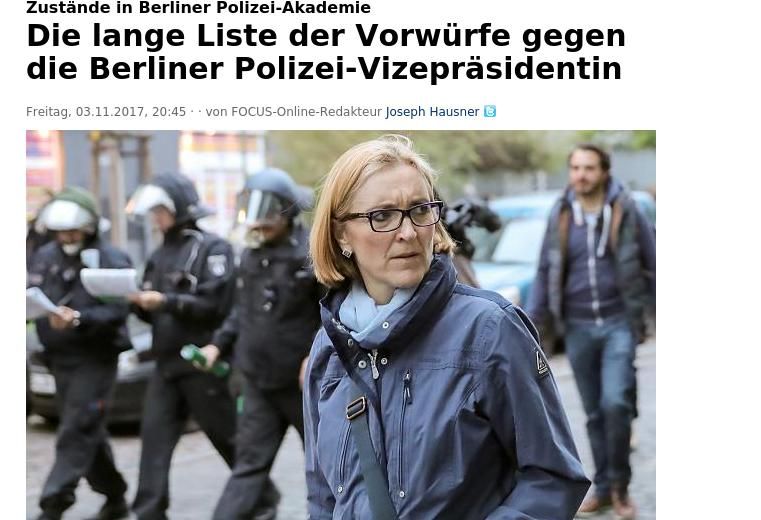 The Deputy Police President of Berlin, Margarete Koppers, has come under fire. An instructor lamented in a voice recording what allegedly are fatal circumstances at the capital’s police academy, and spoke of hatred, refusal to learn, and violence, in a class with many police students with migration background.
Shortly thereafter, Focus released excerpts from an anonymous letter of a Land Office Of Criminal Investigations Detective to the police president of Berlin, in which he accuses Koppers of being too close to criminal arab clans. „She is legally represented by a lawyer who also represents an Arab clan“, the letter said, among others.
The experienced detective from Berlin warns of a subversion of the Berlin police by the clans. „Applicants of these clans are accepted at the police – even when they have a criminal record. Allegedly, findings about this are withheld by this very same Deputy President (and future Attorney General).“

Police President Klaus Kandt denies such allegations, speaks of „unfounded, defamatory, possibly even indictable remarks“ against him and Koppers. But the current reports are not the only cases for which the Deputy Police President has come under critics.

1. Gun Range Affair: Dead and sick police officers, because Koppers did not act?
As the ventilation did not work in many gun ranges, it appears that Berlin’s police officers were exposed to poisonous gunpowder fumes and minerals for years. Koppers allegedly learnt already in late 2011 when she was the provisional police president that a report warned of acute health risks from contaminated breathing air, and recommended closing the gun ranges. But for the longest time, nothing happened.
In the meantime, many shooting instructors and police officers have become ill, suffer breathing and lung conditions. Some of them have developed cancer. Five have died, Radio Berlin Brandenburg reported in March. First charges are laid, some doctors see a connection. Some of the victims blame Koppers personally. The police took up investigations against unknown, for suspect of inflicting bodily harm by professional negligence.

2. Manipulated credentials
„Tagesspiegel“ reports a case from 2012 and 2013, when Koppers already was provisional respectively Deputy Police President. A high-ranking position in the Land Office of Criminal Investigation was to be staffed. According to the report, Koppers changed the credentials of a head of division in hindsight, even though it already constituted a legally binding document at that point – to the negative. She downgraded several of his grades. At the same time, the grades of a different candidate, whom Koppers possibly preferred, were upgraded. The Federal Administrative court ruled that this was an unlawful manipulation of a proceeding for a high-ranking position. It were „not perceptible that Deputy President Koppers had sufficient knowledge“ about „the accomplishments“ of the officer, it said. The officer won a temporary ordinance against the staffing of the position. The court did not answer the question whether Koppers might have committed forging of documents.

3. Firemen duped of their afterhours?
End of July, Focus reported that Koppers’ authority might have duped the firemen of Berlin, for whom she is responsible, of paying their afterhours. They had been working up to 55 hours a week for years, even though only 48 hours were permissible. Koppers’ authority said in different procedures that the claims were partially lapsed, and that the firemen had been informed that the authority would assert lapse of time. This led to the demands of the firemen for 2001 until 2004 being rejected. But an employee information from 2008 shows that the firemen were promised exactly the opposite: „The authority will not assert lapse of time of claims“, it says.
The opposition in Berlin sees an initial suspicion of collusion in this contradiction. The interior administration did not want to comment on the allegations back then. In a statement it only said, one „stood with the fire brigade of Berlin unrestrictedly“.

4. Koppers is getting a new top position – but there are inconsistencies in the selection procedure
In November 2015, the position of Attorney General for Berlin was advertised. Koppers, who allegedly is close to the Greens, applied for the position. In the end, she was head to head with the jurist Susanne Hoffmann, who is close to the CDU. So the Justice Senator at the time, Thomas Heilmann of the CDU, convened a selection panel, staffed with, among others, conservative federal judges. Koppers remained absent from each single one of the selection interviews, took a sick leave.
Then in December 2016, after the elections for the house of representatives Berlin, the Green politician Dirk Behrendt replaced the former CDU Senator of Justice Heilmann. Behrendt decided to fully replace the selection panel. As soon as the new panel was appointed, Police President Koppers, who had been on a constant sick leave before, showed up to the interview for the first time. Just a few days later it was decided that Koppers will be the new General Attorney.

There was outrage in parts of the capital. The opposition of CDU and FDP railed at “Green Sleaze”. The defeated competitor – in contrast to Koppers an experienced prosecutor, even Deputy Chief Investigator in Brandenburg – pressed charges. But the District Court rejected the lawsuit at the first court. Now, Hoffmann wants to take the lawsuit to the Higher Administrative Court.

Gun Range Affair: as the General Attorney, Koppers would be chief of the investigations
The Green senator Behrendt is happy about the decision at the first court: „Berlin will get an intrepid and energetic General Attorney. She has already proven this in several positions“, he said.
The opposition views it differently. „Koppers is responsible for the desolate situation at the police“, says Marcel Luthe of the FDP Berliner to FOCUS Online. „And now she will move on, to damage the Prosecution next?“

The investigation against unknown for causing bodily harm by professional neglect, in the gun range affair, are ongoing. If Koppers indeed becomes General Attorney, she will soon be the boss of the investigations.