The story of Merete Hodne (the hairdresser in Norway who refused to serve the hajib-clad Malika Bayan in her hair salon last October) is just another example of the OIC’s wildly successful 10-year plan to implement a worldwide blasphemy ban.

We are all familiar with this story now. Bayan was turned away and promptly went to the police to file her complaint of religious discrimination. Hodne was found guilty this week and charged with a hefty fine, failure of which to pay could result in up to six months in prison.

While Norway had repealed its blasphemy laws in support of freedom of expression back in March of 2015, they enacted changes to the penal code (section 186) in October of that same year as follows: “A fine or imprisonment for up to six months may be imposed on commercial or similar activity that refuses a person goods or services because of the person’s: a) skin color or national or ethnic origin, b) religion or belief, c) gay orientation, or d) disability…”

The two items from this that are most relevant to the point are a) and b) and (for the purposes of this argument) these are the only two on which this article will focus.

In this, they are saying that religious discrimination is tantamount to racism. That refusing service to someone who declares with their attire that they support values that pose a threat to you and your freedom can be equated to, and carry the same punishment as, say perhaps a “White’s only” bathroom. This is absolutely ludicrous.

This may be a good time to point out, that the “victim” in the afore-mentioned case is Norwegian-born Charlotte Antonsen, pictured below: 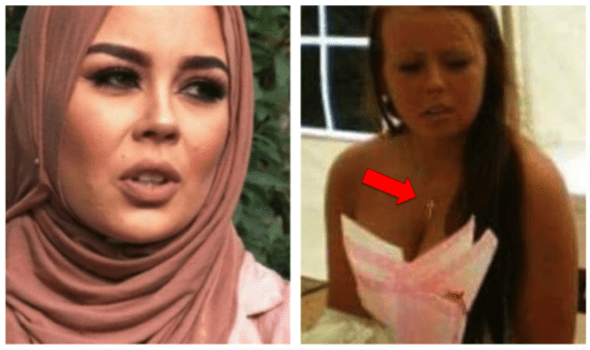 A 19-year-old, wayward Charlotte converted to Islam in 2011, at which point she changed her name to Malika Bayan, pictured at left. She only began wearing the Hijab in 2014.

While we are on the subject of Charlotte/Malika’s faith, it warrants pointing out that she, herself seems to be either misinterpreting or misrepresenting her religion-of-choice. Bannered across her Facebook page is a grossly-out-of-context Muhammad quote, “Whoever hurts a non-Muslim will not smell a whiff of paradise.”

Um…no. The exact quote is: “Whoever killed a person having a treaty with the Muslims, shall not smell the smell of Paradise though its smell is perceived from a distance of forty years.”

In 2015, the OSCE, of which both Canada and the United States are among the 57 participating states, held sessions that, under the guise of “promoting dialogue to prevent radicalization and violent extremism” seemed to be more focused on laying the groundwork to support the idea that merely telling the truth about horrific acts perpetrated by Islam should constitute hate speech.

Stephen Coughlin challenged (9:30) the panel by suggesting this would be “…confabulating a narrative and then deciding to impose it on people and designating people who don’t agree, as haters.” He followed with the question, “Once you decide that facts can be hate, what distinguishes this from just disinformation of the purist form?”

The panelist who responded was Leila Ghandi, a Journalist and Civil Society Activist. “I believe that truth…can constitute hate speech, because sometimes <truth> is difficult, horrible, in itself.” She continued with “…sometimes when you report on facts, and these facts point out a community then it can be a source of hateful speech.” She further explained that the media hiding the truth can sometimes be (and is) used as a way to “tackle” hate speech. (11:26)

This is nothing short of a revelation for the OIC. They merely wanted to (and succeeded, thanks to UN Resolution 16/18 and the CVE) implement a “Ten-Year Programme of Action to make defamation of Islam a crime in international forums and national jurisdictions throughout the world.” (See Stephen Coughlin’s paper Burning Down the house, page 23.)

The goal was to silence any expression that might be perceived to “fuel discrimination, extremism and misperception leading to polarization and fragmentation with dangerous unintended and unforeseen consequences”. To now suggest that good old fashioned, objective reporting is equivalent to defamation of Islam? Well done OIC.

The UN “Strongly deplores all acts of psychological and physical violence and assaults, and incitement thereto, against persons on the basis of their religion or belief…” Well, all acts except any that would be carried out against non-muslims; those are fine.

Merete Hodne, as a free woman, could argue that the hijab is a physical manifestation of discrimination against her own religious freedoms. It could be argued that by wearing it, Bayan was silently (but just as effectively) suggesting that Hodne is immodest, and an acceptable victim for would-be islamic rapists.

has been quoted many times in the last year as saying that she views the hijab as political and totalitarian. Yet she is being labeled as a racist and, with this recent ruling, is being forced to wear a virtual Scold’s Bridle.

We were recently granted an interview with Merete to hear her side.

Norwegian media recently did this short portrait of Merete.