From this most excellent and important website out of France, F Desouche 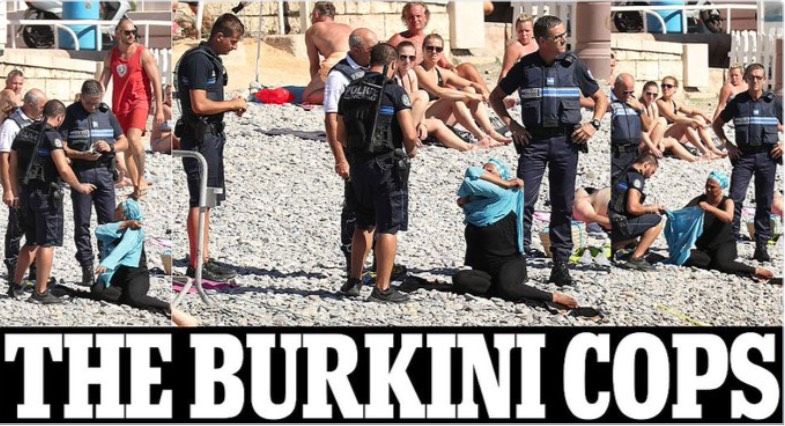 Florian Philippot [Front National] said ironically, on Wednesday morning on RTL, the woman fined “was lucky” that a journalist from France 4 happened to be there. “So it was a great coincidence for her,” he averred.

Gilbert Collard, [Rassemblement Blue Marine — supporting Marine Le Pen from the Front National] for his part reacted on France Info on women in burkinis: “When in the current context a woman goes to the beach wearing a burkini, sometimes with photographers who will take pictures, we know that it makes the religious dress propaganda, and serves the controversy ISIS wants to initiate.”

Julien Dray, a former member from the Essonne [department in the Île-de-France region], believes the pictures of a woman forced to remove her veil in front of police in Nice were devised for the purpose of dividing the French. “No need to be a rocket scientist to understand that the photos on the beach in Nice were not surprise-pictures…”

Contacted by Scan, this insider close to François Hollande says: “I wonder; I am suspicious. If these pictures are sponsored, the one who did it wanted to create the buzz that we see these days. The objective is to divide the French.” And then this government official proceeds to point out some items that are suspicious in his eyes: “The images are very clear, probably made by telephoto. The woman wears no glasses, near a police station … It’s weird to see her lying like that, with no towel on a pebble beach. She doesn’t seem to be there to tan, because she’s covered, but she hasn’t brought an umbrella.” “A photographer was dispatched to be on hand to take these pictures. For what purpose? By whom? No sooner had they been uploaded, the images already went around the world and could be found in all the press, especially in the media of the Middle East. It was my buddies who alerted me, when they saw the thing spread,” says Julien Dray.
“These images appear to have been prepared. If true, this is very serious. This confirms that people are deliberately trying to undermine the unity of society, liberty […] When we enter this debate, we are already in the trap that tends to divide the country between the naive and the alarmists. We are caught between two extremes,” said the former MP for the Essonne. Without going so far as to identify a sponsor, Julien Dray wonders who would benefit from the deal. “We have to see how the Committee Against Islamophobia in France (CCIF) plays it in the coming days; we know how they operate.” On social networks there’s a shared suspicion that the event was staged, which also includes the Cannes episode relayed in Obs.[Le Nouveau Observateur]

One Reply to “Veiled woman fined: Philippot and Dray suggest a manipulation.”