No Chocolate Pudding. So the fake Syrian burns the Asylum home down! 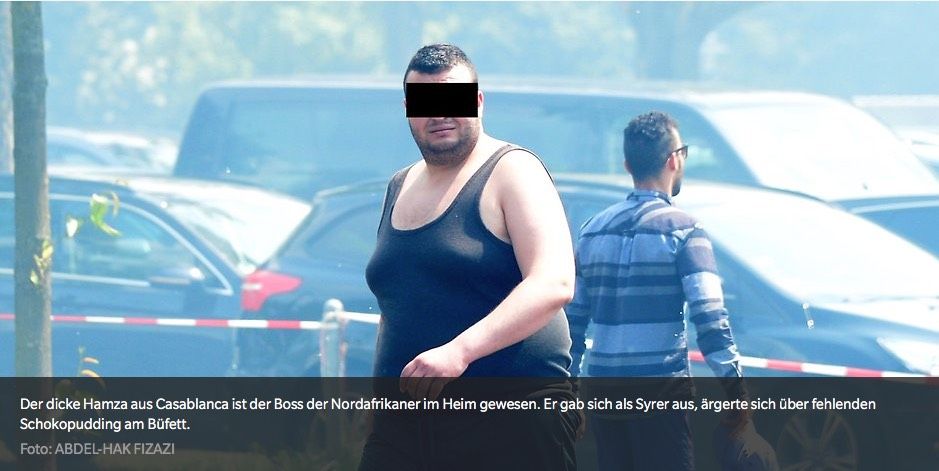 The fiery blaze in the refugee home was set because of the lack of chocolate pudding. Fact is: Monday night police had to be called because a group of North africans, lead by the fat Hamza, who started a fight with security personnel because of food – and then announced the arson.

He is a noticeable person at the edge of the large blaze. With black muscle shirt and obviously overweight, Hamza (26) stands in the shadow of a tree. Around him a group of other North africans. Conspicuously: With them are packed suitcases, as if they had known that the home was going to burn down.

And little later it becomes clear: Hamza did know. He bragged to MOPO reporters that he indeed started the fire. Soon thereafter he gets arrested by the police. Seven more members of the group as well.

“Two of them we arraigned to the magistrate,” the prosecutor, Ralf Herrenbrück, says. Next to the ringleader Hamza who had hatched the plan, the actual arsonist, a 26 year old Moroccan, also was arrested. At the behest of his boss, he spilled Schnaps on his mattress and then lit it on fire.

But why did the North africans torch the hall? According to MOPO investigations, it profanely was about food.

Monday night the group around the fat boss had rudely accosted security personnel at the home – since it is Ramadan and muslims are not allowed to eat during the day, and the buffet was empty after sundown. At 1:30 AM security alarmed the police.

A little later there was something to eat, but Hamza was not content.

MOPO has information according to which, the Moroccan then loudly protested, because there was no chocolate pudding!

“The group announced that they would set fire to the hall if nothing changes”, Christian Anfang, leader of the investigative team from the KRIPO, explained. (KRIPO – Kriminal Polizei, Criminal Police) And then tuesday, another fight: This time the group wanted a buffet with more variety, despite Ramadan.

All persons involved are now investigated against for severe arson. Plus they are investigated for false identities. When applying for asylum and in statements to the police, Hamza and his colleagues from Morocco and Algeria had claimed to be from Syria and Iraq.

4 Replies to “No Chocolate Pudding. So the fake Syrian burns the Asylum home down!”