Wed. May 11 2016. A Jewish deli, already burned down in an act of Arson by “Asians” was burned down again just as it was about to reopen after repairs and renovations.

Ta’am Grill and Bakery in Manchester was due to open just days after the attack – which one of the owners says could have been conducted by “a group of Asian boys”.

Amos Vaisman posted a video on social media showing two men breaking into his shop and dousing it in petrol.

The men then set fire to the building from the bathroom, with the flames spreading rapidly through the various rooms.

On a post attached to the video he wrote: “We have clear footage of the criminals involved and additional footage of them sending a group of Asian boys to go and buy petrol from the local garage.

(Video of the fire starting at site)

Now lets compare that to related items at the end of the same article: 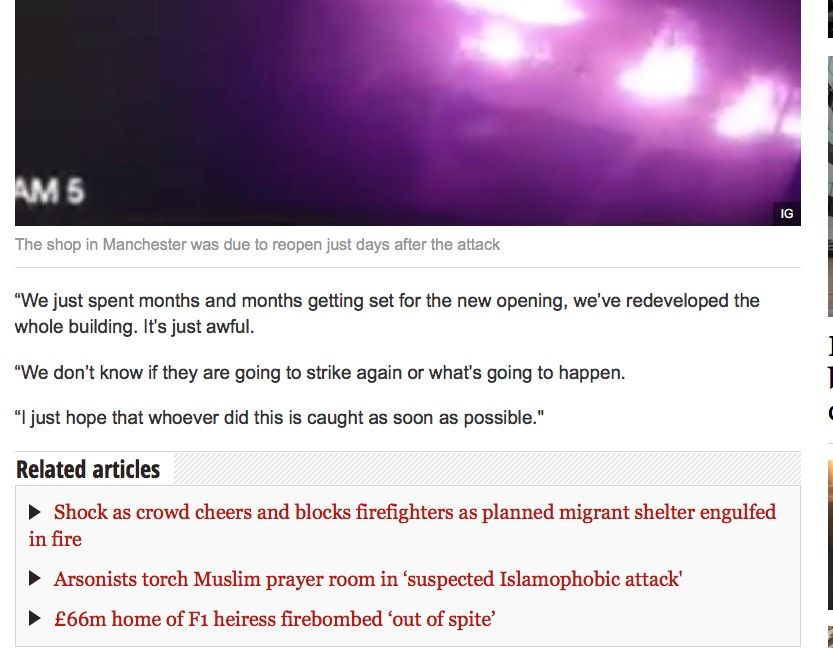 So when a Muslim structure burns, its “Islamophobic” even though the facts are, a significant amount of the time this happens, it was Muslims who did it, either out of anger, from a competing sect, or to blame the indigenous people of the area in order to get government money to build a larger better newer facility.

When a specific Jewish business is burned not once but twice, its a gang of “Asians”.

Have the people of the Western world bred themselves into a state of suicidal docility?

A few minutes thought will lead us to where this will go, both obvious and less so.

Lets say you are an actuarial. A Jewish person asks for insurance, which is mandatory now of course, to open a deli or any other business that can be identified as Jewish. You check your charts and find that the risk of arson due to ‘crime’ is an order of magnitude higher than for a non-Jewish business. Now the cost of operating is more than one can earn.

Other people who share the same structure also may suddenly not want to allow a Jewish owned or identifiable business to open. They will perceive the risk as coming from the victim, as is the human norm in times of civilizational collapse, as it is recognized that the government cannot and will not act against those who are committing these acts, or as we treat it as a crime and punishment issue and not as a military one, which is what it is, then it doesn’t matter if they do catch the perps because it will make no difference in terms of the risk since there will always be more muslims ready to wage jihad. Again, because it wasn’t a crime per se, in the first place.

The net result will be a net win for the Muslims. They will achieve the first part of the goal, “First comes Saturday, then comes Sunday”. A reference to first, dealing with the Jews and then the Christians.

It is this author’s belief that this cannot change unless we change our view of what is taking place here. Until we understand that war is being waged on us all by Muslims, and that their tactic is to do so in a manner we do not understand, so that we cannot use the proper tools to fight back, we will lose.

There are less than 4 leaders and even potential leaders who appear to understand this, even by inference, in the world today.

The rest of us had better learn to think for ourselves.

As the “Islamophobic” attack in the link took place in Corsica, it is much more likely that it was a targeted attack against this building because of its purpose. But the history behind it is not what the article indicated whatsoever. It was an illegal mosque operating by very radical jihadis who had really angered the locals many times and many ways. When it became clear that the authorities would not uphold the laws in Corsica, the people did what people should do. They enforced the laws themselves. The crime was the mosque. The response was enforcement. Just not by those who should have done it.

However what I wrote about arson against Islamic buildings in this article holds true for the UK and nearly everywhere else in the West.

Mosques that are attacked in the Islamic world are pretty much all due to Islamic rivalry, Sunni-Shiia conflicts and personal vendettas with the occasional revenge attack by Christians and Buddhists or Hindus where numbers allow and Muslims are heavily on the offensive to take that territory for Islam.