This is one of the best, but also most pernicious examples of what Steyn and Levant call, ‘I support freedom of speech but..’ I have seen to date.

The brilliant and insightful evolutionary biologist, Richard Dawkins, was recently invited to speak at a scientific conference.

Before I continue I would like to say a few words about Dr. Dawkins. Whether you believe in God or no, whether you subscribe to creationism or evolutionary biology, Dawkins’ books are fantastic reading. His model has a lot of predictive value, and for that alone its good reading, but The Selfish Gene is also chock-a-block full of insights into human behaviour without ever describing human behaviour. Quite a trick. And something all parents might find useful in raising children. The issue of human origins is secondary in all, even if Dr, Dawkins would not agree with that last claim.

The conference which invited Richard has rescinded its invitation and offered a refund to all who planned to attend the conference. I doubt that would include airfares or hotel deposits however.

Lets have a look at their reasoning verbatim: 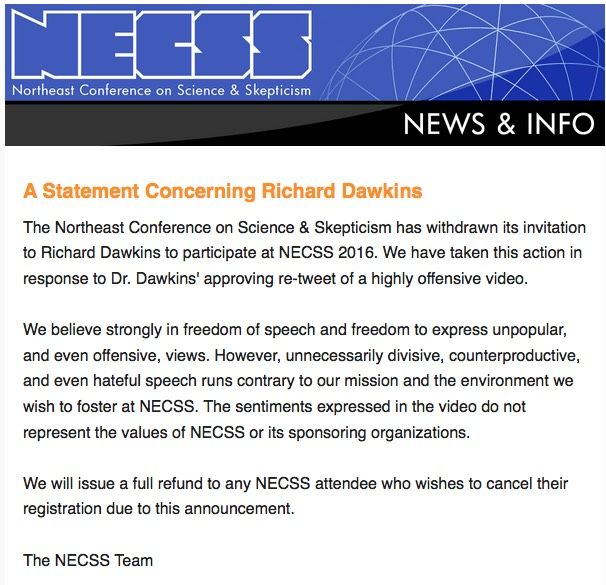 Let’s parse this a little:

“We believe strongly in freedom of speech and freedom to express unpopular and even offensive views.” But in the very next line they qualify that statement to negate pretty much anything anyone at any time and under any circumstances finds offensive for any reason. The language of cultural-Marxism ensues:

“Divisive, counter-productive (but no standard given for what constitutes productive and certainly no exception was made in the previous statement that all speech must be ‘productive’ on this unnamed standard) and hateful, meaning the organizers hated it so it doesn’t count under the former statement of: “We believe strongly in freedom of speech and freedom to express unpopular and even offensive views.”

This is some of the most blatant Cultural Marxist/Orwellian hypocrisy I have seen from a scientific body of sufficient gravitas that a person like Richard Dawkins would consider speaking to.

Now on to the video. It has to be a Leni Riefenstahl award winner right? (The Wiki attempts to sanitize her role as Hitler’s film propagandist for anti-semitic materials) Or at least it has to be some vile KKK video on racial inferiority right?

This goes out to the descision makers at the ICSS   a paraphrasing from one of the great lines from the brilliant British series, I Claudius,

‘You remind me that what is most important to the human being, is our sense of smell’

To see Richard’s twitter feed with a description and other indicators that the above video is the correct one, click here.