This is an original translation by Liberty Dk.

From this Swedish Newspaper 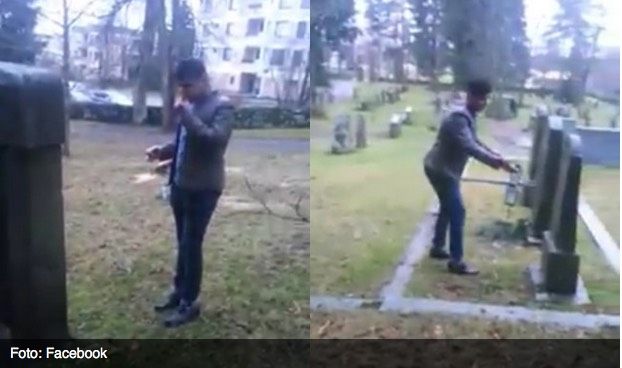 A video clip of a group of refugees who move around in a cemetery in a city in Finland while mocking Christianity, as well as the Finns who are buried there, has brought up strong feelings in Finland. Now the men who appear in the video, and who live in an asylum center in the city have apologized.

The video, uploaded to Facebook, shows how Arab refugee caper about and make fun in a cemetery in the city of Kangasala in Finland. Among other things, the man recites verses from the Koran, pretending to lament the dead who are buried in the cemetery and making derisive sign of the cross. All the while his comrades were laughing and filming the act.

The men themselves uploaded the video to Facebook, which then rapidly spread even amongst Finns who reacted with disgust at the disrespect shown by the refugees. Among other things, the blog MV Lehti, the Finnish equivalent of the Swedish Avpixlat, highlighted the video.

The post has been commented on by a large number of people including several who have sent death threats to the man in the video.

The refugees in the video come from Iraq and live in an asylum center Kangasala which is run by the Finnish Red Cross. According to the asylum center’s director Katja Ala Kapeen the man in the video regrets his actions.

It was wrong and foolish. The man is sorry for what happened, he did not want to offend anyone, she told the local newspaper Kangasalan Sanomat.

The asylum center in Kangasala received media attention at the end of October by the Finnish national media when the refugees had organized a food protest because they weren’t being served Arabic cuisine.

They sometimes feel that Finnish food is poor as they are accustomed Iraqi food in their homeland, said the Manager Ala Kapeen to the Finnish government and media company YLE in connection with the protest.

4 Replies to “Muslims in Finland mock Christianity, the dead and a cemetery on video”