Police in the Finnish capital, Helsinki arrested several people on Friday as a rally of the anti-immigration group Soldiers of Odin was met with a counter-protest by anti-fascist activists.

The demonstration was held as the country marks 102 years of its independence. Footage shows the right-wing supporters marching with Finnish flags and later with torches as police separate them from rival protesters chanting offensive slogans.

“Our main objective is offer for ordinary people similar kind of protests that traditionally student unions had a bit earlier on this day, with torches and darkness outside. So it looks very nice and very peaceful on a graveyard. It is a very touching moment for everybody,”

In 2019, speaking the truth to protect our children is ‘hate’

Here is the whole video as translated by TundraTabloids.com and titled by us:

For details please see Tundra Tabloid’s post on it here.

This is an interesting conversation with some real content.

This site, with the guidance and help of Tundra Tabloids, has tracked this very brave man, Jussi Halla-aho, from the start, who has done nothing except speak obvious truths in opposition to the communist narrative on muslims in the West, for which he has been seriously persecuted and prosecuted. Search this site, and Tundra T. for a history of this brave politician.

This is the very near future of journalism. The legacy media simply no longer can be trusted to represent events or realty, but only the culturally-Marxist narrative.

No one but NO ONE must ever do an interview without your own people filming it from somewhere that all parties can be seen.

Below, is a video of YLE, a Finnish broadcaster, interviewing Katie Hopkins about her Finnish tour concerning the newly outed Islamic child-sex-slave gangs, but filmed by her own person.

How fun will it be to compare this to the one that gets broadcast on Finnish TV. If it does at all of course.

Regular readers of this site may remember an interview with Finnish city councilman, Junes Lokka. Yesterday he was arrested for filming an ANTIFA counter-demo against citizens for freedom of speech, while standing next to many other people also filming the same event. His girlfriend’s video and explanation is below:

The original interview with Junes Lokka from April 30, 2017 is below:

For the moment being, please see these accounts in the British Press:
The Sun, GB: KNIFE RAMPAGE Finland attack – Knifemen stab six – including a woman pushing a pram – during rampage through city of Turku amid reports of shots fired
Express, GB: BREAKING: Knife rampage in Turku, Finland – one dead, five injured and city in lock down
Mirror, GB: Finland ‘terror attack’: Live updates as multiple people are injured after knifeman ‘screaming Allahu Akbar’ goes on rampage in city centre

Update: A heavily pixelated video by Onlinemagazine on Twitter

????? #Finland: Several people were injured by Islamic knife attack in #Turku. Terrorist was shot by the police! pic.twitter.com/saJIpsdlEH

Update: Finnish twitter Users point out that the shouting heard in the video below are Finnish “varo, varokaa”, meaning “watch out!”.

Re: video of the Turku attacks claiming the shouts are "Allahu ackbar", he seems to actually shout "watch out" (varo, varokaa) in Finnish. 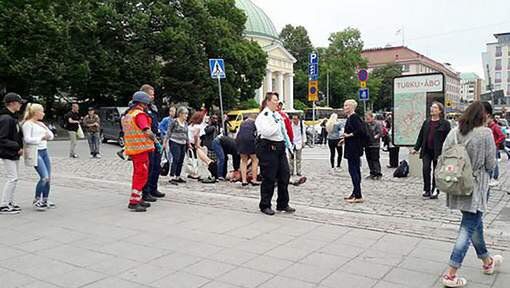 This would be an excellent post for parents in the Western nations to write their own stories about having to reeducate their children after especially intense periods of Marxist brainwashing.

Many parents have relayed stories about how their children where told to report back to the school if, for example, the family had the wrong kinds of appliances, which would allegedly lead to ‘global-warming’ for using too much power.

This Stalin-Orwellian treatment by schools, using children as Stasi against their own families, is becoming more the rule than the exception. But there would likely be catharsis for others to know they are not alone in the constant battle to instil critical thought in their children as opposed to critical theory.

So please do. The time to really make this kind of event known is now before it is simply accepted as the new normal.

The ship is slowly turning. The more hands on the helm the easier it is for each of us to steer away from the iceberg.