Someday, if I am ever laid up with a broken leg, I might try and make a video where I grab and contrast every anti Bush joke or anti conservative joke on Family guy and compare them to any critical or mocking of the Obama admin for the 6 years they have been in power so far.

I know where the majority of the work will be.

Granted there are one or two quips about Clinton but I don’t remember too too many about Obama. Or even one actually.

Family guy like every other form of expression is certainly allowed to have its biases though and I have no real problem with that just as I hope they have no problem with anyone pointing out those biases. Fair enough, that is what freedom is after all.

But one I do find especially disturbing was a very quick few frames in a series called, ‘The Following’ on FOX. It is a 1 hour drama series about a psychotic killer who creates a cult of other psychopaths to wreak havoc and murder people in a sort of quasi-artistic fashion.

At one point, a few affiliations are mentioned that some of these killers are said to be affiliated with. I don’t remember who they are offhand, they may have been fictional. But in one episode near the end the FBI manage to seize a compound where this cult tortures and kills people, conditions other people to be merciless killers and hatches plots against the public as well as stores explosives and so on.

On the back wall of this hidden compound, there was a giant banner associated with one modern organization. A group that has no criminal history, in fact is very anti-criminal in a nice way. A group that believes in individual rights and has never killed or threatened to kill anyone.

Click the read more button to see the screen grab and see if it reminds you of the same group. Or am I just being paranoid? 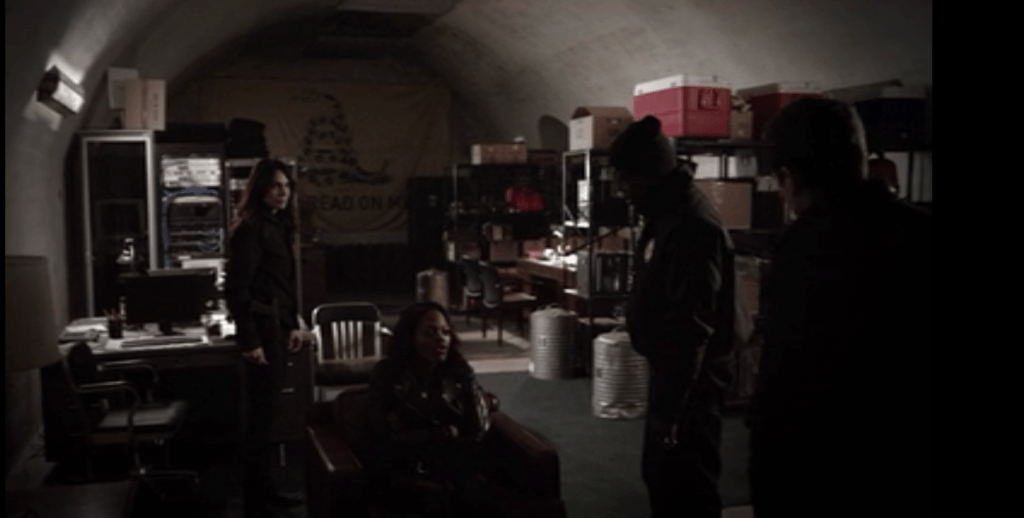