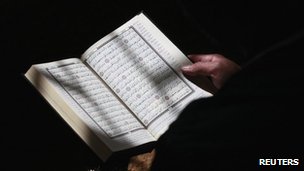 A Chinese man in Pakistani-administered Kashmir has been taken into protective custody after he was accused of desecrating the Koran, officials say.

The man, named only as Mr Lee, works for a Chinese consortium that is building a dam in Kashmir.

A police official told the BBC that Mr Lee was held to prevent him from being lynched by an angry mob.

Allegations of blasphemy are taken very seriously in Pakistan with a number of controversial recent prosecutions.

Kashmir’s chief of police has assembled a committee of officials, politicians, local clerics and journalists to investigate the matter.

The police have not yet registered a case, saying they will wait for the committee’s report.

This is the first time a foreigner has been accused of desecrating holy scriptures under Pakistan law, the BBC’s Zulfiqar Ali reports.

An official in the town of Muzaffarabad, close to where the alleged incident took place, said that the accusation was linked to a dispute which had taken place between Mr Lee and a local doctor hired by the consortium.

5 Replies to “Chinese man held in Kashmir over ‘Koran desecration’”