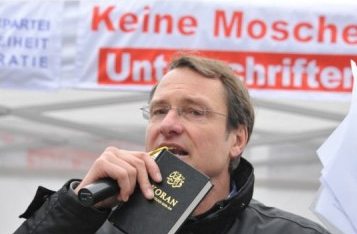 Michael Stürzenberger is a well-known Islam critic in Germany, and was one of the honored guests at last summer’s Brussels Conference. His outspoken style and uncompromising attitude have made him — along with Politically Incorrect and Die Freiheit — persona non grata with the Bavarian government. As with so many other Counterjihad figures who draw the baleful gaze of the authorities, Mr. Stürzenberger has been prosecuted by the state. In his case, the issue was the display of a photo of Heinrich Himmler at a Freiheit rally. No Nazi propaganda was included — and, as everyone familiar with the larger European Counterjihad movement knows, Nazi references are employed to wake citizens up to what lies ahead if their governments continue to cosset Muslims in their midst.

Yesterday Michael Stürzenberger was acquitted in a Munich courtroom. JLH has translated a report from Politically Incorrect on the auspicious occasion, and includes this introductory note:

As Stürzenberger often does, he allows his opponent to “speak” at length, by including Kaster’s article and surrounding it with his own atmospheric descriptions of the scene.

I said recently when introducing an article leading up to this trial, that Stürzenberger’s technique of disputation reminds me of a verbal version of a Clint Eastwood film. He seems to revel in the encounters and in his victories. I suspect that this alone will make him a permanent target of Islamists and leftists.

Munich Trial: Acquittal
No Penalty for Himmler Poster
May 13, 2013

Every seat in courtroom A225 of the Munich court building was occupied on the second day of the Islam-Himmler-poster trial. Several interested parties had to stand in the hall. After four more hours of witness interrogations, viewing of the TV documentary “Sarrazin’s Germany,” summations by the prosecutor and the defense attorney and final comments from the accused, the judge announced his verdict: acquittal. With that, the very fairly conducted trial of the Islam-clarifiers came to a welcome end.