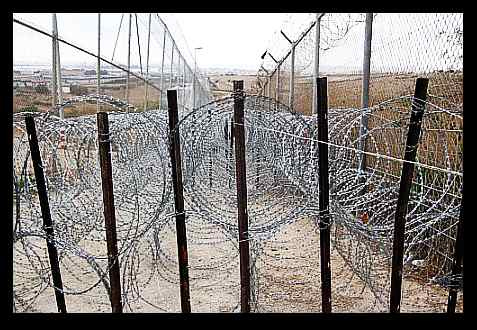 [Caption] A young moroccan climbs over the Melilla [border] fence

Two Guardia Civil officers were injured during a simultaneous attempt by fifty immigrants to enter Melilla by jumping the double fence to Morocco, and about 20 of them have managed to reach spanish ground, according to informations by a speaker at the Delegación del Gobierno.

The facts have occurred this tuesday morning, shortly after 00.15 h, when a group of sub-saharians, about half a hundred, tried to jump the fence separating Melilla from Morocco, not far from the arroyo [creek] de Beni-Enzar. According to the source cited, ‘the sub-saharians, ignoring all the instructions, made a coordinated group jump, which required a rapid intervention by the Guardia Civil’.

The government speaker indicated that thanks to the actuation of the Benemérita [one of the monikers for the Guardia Civil], whose task it is to watch and defend the border, ‘a large part of the group was intercepted, thereby preventing them from entering into Melilla, although it is estimated that some twenty actually managed to enter our city’. During the intervention, however, 2 Guardia Civil officers were injured: one of them with injuries in his right foot which led to his sick-leave; and a second one with abrasions on his hands, arms and knees.

The speaker has informed that the delegado del Gobierno, Abdelmalik El Barkani, ‘wants to send out another message of support and backup to the Guardia Civil, for their intrepid efforts in matters of control and defence of our border, and wishes the injured officers a speedy recovery’.