I am afraid due to an error on my part, there is a missing section of the translation for the interesting and very popular documentary on sexual harassment of women in Belgium, seemingly from entirely Islamic immigrants to that country.

The error was a process one on my part and I am fixing it now. The video will be offline for about 25 minutes while the new file uploads and processes with the complete (I hope to Zeus) translation intact.

The trailer that was translated and posted last week of this show has hit well over fifty thousands views, and that is on my post of it alone. I know it has been moved to various youtube channels where it enjoys robust view counts as well.

Michael Laudahn, Baron Bodissey and others have worked very hard on translating and subtitling this entire show for everyone. It is interesting to see, how did one commenter put it, a confirmed lefty hit substantially in the head with a reality stick? Something like that.

One thing about this documentary really does offend me however.

While they talk about how all the offending actions and remarks are from foreigners, they seem oblivious to the fact that:

None of the foreigners were Chinese, Japanese, Korean, Thai Buddhists, Russian or Polish people, in fact, all of them seemed to be from countries that almost certainly makes them Muslims. 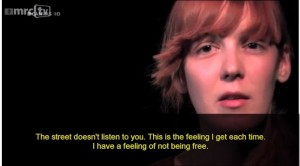