Spain can be shored up for a while; but its woes contain an alarming lesson for the entire euro zone 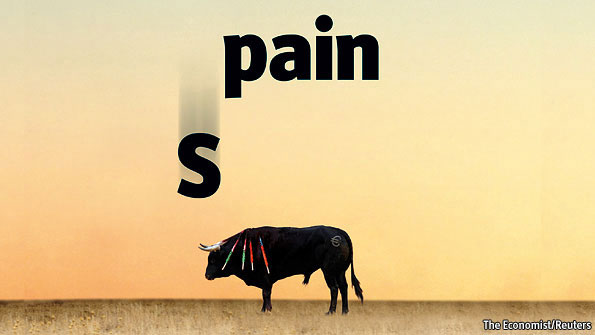 THE worst nightmares are the ones you cannot wake up from. Just ask Spain. A year ago the cost of Spanish government borrowing soared as euro contagion spread from Greece, Ireland and Portugal. Panic seemed to subside with central-bank intervention and the promise of a new reforming government in Madrid. Since then Spain has, broadly, been as good as its word and Mariano Rajoy’s government has cut budgets, freed its labour market, played its part in countless “make-or-break” summits in Brussels and secured up to €100 billion ($121 billion) to prop up its banks. Yet despite all its efforts and pain, Spain cannot shake off that sense of doom. On July 25th the yield on ten-year bonds touched a euro-era record of 7.75%. Two-year bonds have climbed above 7%: investors fear that Spain must soon ask for a bail-out—or default.

One Reply to “The flight from Spain”