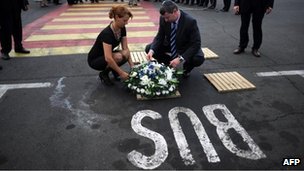 The suicide bomber who killed six people in Bulgaria last week was part of a sophisticated group of conspirators, Prime Minister Boiko Borisov has said.

He said the group had arrived in Bulgaria a month before the attack.

But he declined to back Israeli claims that Iran and Lebanese militant group Hezbollah played a role.

Five Israeli tourists and a Bulgarian bus driver died in last Wednesday’s bombing in Burgas on the Black Sea.

The identity of the man who carried out the bombing remains unclear.

As well as those killed, dozens of people were wounded in the blast.

Israeli Tourism Minister Stas Misezhnikov laid a wreath at the bomb site during a memorial ceremony on Tuesday.

Mr Borisov, who was speaking in Sofia alongside White House counter-terrorism chief John Brennan, said the US was supporting Bulgaria’s investigation into the attack.