The troops say they have had to change their procedures as part of American-led efforts to cut down on the number of civilians being wounded, but the new approach has made them more vulnerable.

In the past three months, 11 British soldiers have been killed by enemy gunfire in Helmand province, compared with just two in the same period last year. 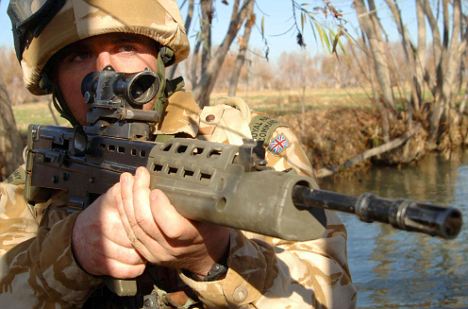 In the line of fire: British soldiers say a tactical change stopping them from firing first has left them at greater risk of death or injury while on patrol in Afghanistan

The Ministry of Defence denied there has been any change in the rules of engagement for British troops. However, a spokesman for the multinational forces headed by US General John Allen confirmed there had been a tactical review after which the British were told to alter their procedures.

Soldiers now say they are particularly vulnerable when they are manning checkpoints at road junctions or patrolling Taliban heartlands such as the so-called ‘green zone’, a densely vegetated river valley.

In the past, they say, they could shoot first at armed insurgents but are now only allowed to return fire.

7 Replies to “UK troops told: ‘Don’t shoot unless you are shot at… and our Helmand casualties soar”